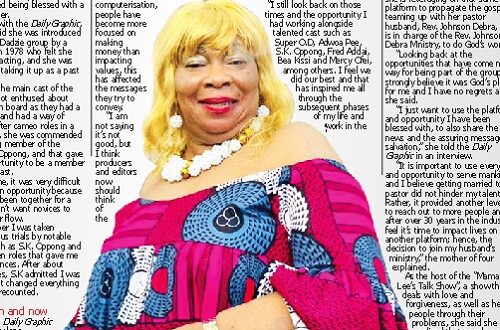 She may not be a popular figure among this generation, but Lousia Addo Debra, aka Mama Lee, was a household name during the late 1970s and early 1980s with her time as a member of the popular television drama, Osofo Dadzie.

One of the budding television actresses, Mama Lee, was a key member of the Osofo Dadzie group and worked with the original team that entertained and educated viewers of the popular and favourite local drama of the time.

What was supposed to be a pastime ended up being a career and presented her with opportunities which included being blessed with a lifetime partner.

In a chat with the Daily Graphic, Mama Lee said she was introduced to the Osofo Dadzie group by a good friend in 1978 who felt she was good at acting, and she was only keen on taking it up as a past time

“At the time, it was very difficult to get such an opportunity because the cast had been together for a while and didn’t want novices to interrupt their flow.

“I remember I was taken through serious trials by notable members such as S.K. Oppong and was only given roles that gave me brief appearances. After about three episodes, S.K admitted I was good and that changed everything for me,” she recounted.

Acting then and now

Taking the Daily Graphic down memory lane, Mama Lee said comparing acting in their day to what pertains today gave her a good feeling, as the performers in their time used their talent to give out all the make believe scenes, while today’s performances rely so much on technology.

“Comparatively, in our time, things were different than today. In our day, one had to show lots of talent and zeal to be given roles, it was not easy as I see it today. Currently, it is more about looks and a bit of talent and technology helps to do the rest. That is a positive thing though,” she said.

“Back in those days, the cameras were few, as such most of the actions required actors to be creative. An action could be acted severally and shot countless times to get the desired results.

“Our story lines were based on things that did not only entertain, but also educated and promoted the good values in society.

“Today, due to the availability of the internet and computerisation, people have become more focused on making money than impacting values, this has affected the messages they try to convey.

“I am not saying it’s not good, but I think producers and editors now should think of the youth who assume what they watch in those productions is real life!” she advised.

Though she acted in many episodes over a span of eight years, she listed “Obra ne woara, Awarepa mu nsem, Obaa sima, Medo wiase,” as among her favourites and which had her put up some of her best performances.

Describing her time with the group as ‘golden opportunity’, Mama Lee said it provided her with the chance to travel and tour Europe and North America, where she eventually met her husband and settled in Toronto, Canada.

“I still look back on those times and the opportunity I had working alongside talented cast such as Super O.D, Adwoa Pee, S.K. Oppong, Fred Addai, Bea Kissi and Mercy Ofei, among others. I feel we did our best and that has inspired me all through the subsequent phases of my life and work in the entertainment space,” she said.

Switching from screen to pulpit

After years of touching people with her roles in acting on local television in Ghana and also in Canada, Mama Lee has decided to now use the same talent to work in God’s vineyard to evangelise and win more souls for Christ.

For over three decades, she has used her talent and stagecraft as an actress both on television and in movies and as a talk show hostess in Canada to influence lives. Now she is leveraging on that same platform to propagate the gospel by teaming up with her pastor husband, Rev. Johnson Debra, who is in charge of the Rev. Johnson Debra Ministry, to do God’s work.

“Looking back at the opportunities that have come my way for being part of the group, I strongly believe it was God’s plan for me and I have no regrets at all,” she said.

“I just want to use the platform and opportunity I have been blessed with, to also share the good news and the assuring message of salvation,” she told the Daily Graphic in an interview.

“It is important to use every gift and opportunity to serve mankind and I believe getting married to a pastor did not hinder my talent. Rather, it provided another leverage to reach out to more people and after over 30 years in the industry, I feel it’s time to impact lives on another platform; hence, the decision to join my husband’s ministry,” the mother of four explained.

As the host of the “Mama Lee’s Talk Show”, a show that deals with love and forgiveness, as well as helping people through their problems, she said she realised that people needed counselling and that inspired her to make that bold decision.

Explaining what informed her decision to become a talk show host, Mama Lee, who starred in films such as ‘Abrokyire Abrabo’ and ‘Lust of the Flesh’, said she decided to remain relevant in the media industry when she decided not to go on stage or in films as an actress.

“I decided not to go into full-time acting again, but dedicate the rest of my time in the media industry to reach out to people who need help.

“The feedback from the talk show showed that people need help and the key to all of world’s troubles is knowing Jesus Christ and allowing Him to take charge of all situations while seeking physical help too. So after careful thought, I decided to include evangelism in the programme,” she said.

“Life’s stresses and disappointments have left people bitter, some have given up on life and they are pushed to contemplate all kinds of things and the main solution is helping them out of those situations through the word of God and that is what I have dedicated my time for now,” she emphasised.