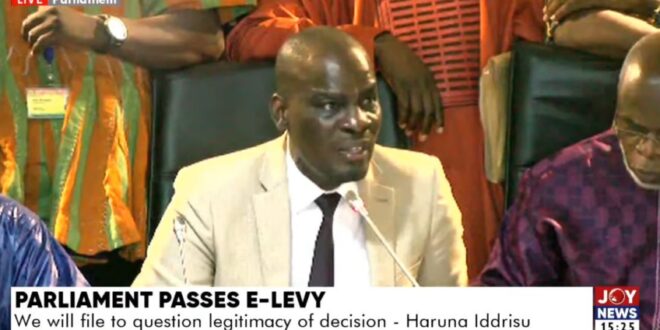 The Minority is not backing down on their bid to prevent the implementation of the Electronic Transaction Levy (E-Levy) Bill.

Parliament is now waiting on President Akufo-Addo to assent to the approved tax.

The Majority in Parliament approved the E-Levy after the Minority walked out saying the tax is a tool to exacerbate the plight of the ordinary Ghanaian.

Today’s decision was reached after the Consideration Stage was completed under a certificate of urgency.

But the Minority has given an indication to contest the decision at the Supreme Court.

Minority Leader, Haruna Iddrisu insists that the parliamentary procedure was breached in the lead-up to the passage.

In a press conference following the Bill’s approval, Mr. Iddrisu explained that there was no quorum in the House that supervised it.

For this reason, the NDC MPs have declared the vote null and void.

Therefore, “those of you who are celebrating with them that E-Levy has been passed and accordingly passed, your excitement will be short-lived.”

He said the latest happening goes to vindicate their stance that the ruling on quorum was absurd.

“It means that you needed at least 138 for any decision. Whether on the amendment, whether on third reading or during the consideration stage that the Constitution so elaborately provides for. So we didn’t want to associate with it.”

According to the MP, the NDC has articulated its resolve against the levy and will follow it through.

“At the level of the principle, we shared with the Ghanaian people our rejection and rejection of the E-Levy. We stand same at the same level.”