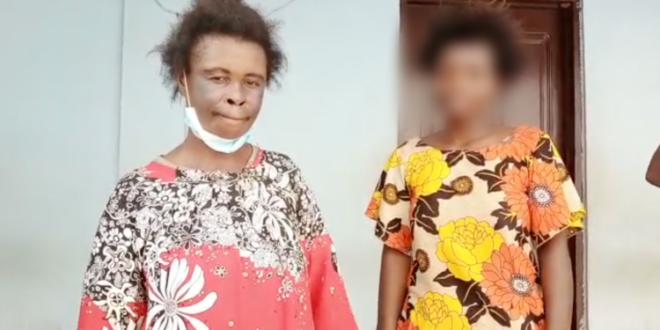 The Kumasi Circuit Court has sentenced a 45-year-old woman, Theresa Asamoah to six years in prison with hard labour for her involvement in a baby theft incident at the Kumasi South Hospital.

Her daughter, 21-year-old Priscilla Appiah, who pleaded not guilty, has been granted a GHS100,000 bail with three sureties to be justified.

According to the Police, their investigations show that Theresa Asamoah and Priscilla Appiah on June 10, 2019, tricked a nursing mother who had just delivered at the hospital and took away her baby.

The police say the woman who had just delivered, migrated from Nandom and was a head porter staying with Theresa Asamoah and her daughter who at the time had faked a pregnancy to her husband.

During the court hearing on Thursday, the prosecutor Inspector Oparebea stated that Priscilla Appiah then took the baby home and informed her husband that she had given birth while the head porter, Sylvia Pime, was told that her baby died shortly after she gave birth and was sacked from the house.

The prosecutor added that Sylvia Pime, after receiving that news, went back to her hometown, Nandom only to return in two years time to Kumasi to realise that her baby was still alive.

She then reported to the police.

Speaking to Citi News, the Ashanti regional coordinator of the Domestic Violence and Victim’s Support Unit, (DOVSU) of the Ghana Police Service, Superintendent Susana Dery says they launched investigations immediately which led to the arrest of the suspects.

According to the charge sheet, Sylvia Pime’s parents died in an accident while she was six years old. She then moved from her hometown, Nandom to stay with her uncle, whose name has been given as James in Sunyani.

However, according to Sylvia, her uncle defiled her at the age of fifteen (15) and then threw her out of the house saying that it was an abomination for her to get pregnant since they are related.

Sylvia then moved to Kumasi to become a head porter.

When she was six months pregnant, she met Theresah Asamoah who took her home and made her stay with her and her daughter, Priscilla Appiah who at the time was faking pregnancy to the husband.

The prosecutors say on 10th June 2019 when Sylvia was in labour, Theresah Asamoah and Priscilla Appiah accompanied her to the Kumasi South Hospital and shortly after she gave birth, Priscilla and her mother told her that the baby had died and had been buried by the hospital Authorities.

Sylvia told the police that at the hospital, Theresah Asamoah and Priscilla then asked her not to return to their house since her baby was dead. She says she was not even allowed to go back to the house and take her belongings.

She then returned to her hometown, Nandom.

In August 2021- two years after leaving Kumasi, she returned and got the information that her daughter was still alive.

But Priscilla was taking care of her as Priscilla’s husband was made to believe that he was the biological father.

Sylvia told the police that in her attempt to confront them, Priscilla and her mother relocated to Accra.

She reported the case to the Domestic Violence and Victim’s Support Unit (DOVSU) of the Ghana Police service which led to their arrest.