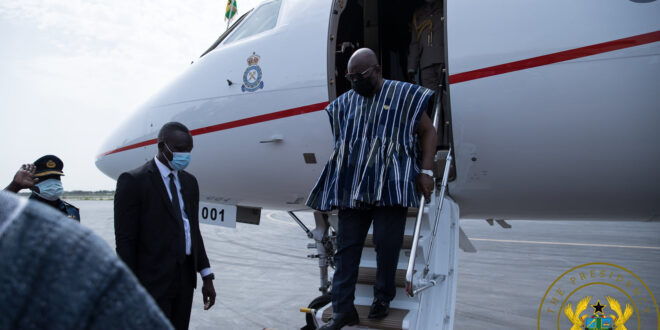 Why Ghana is acquiring a new and bigger presidential aircraft

The government has initiated processes to acquire a new and bigger aircraft for presidential use in addition to the existing French-built Dassault Falcon 900 EX-Easy aircraft, acquired during President John Agyekum Kufuor’s era in 2007 but was delivered for use in 2010.

The Minister of Defence, Mr Dominic Nitiwul is handling the processes and expected to announce details later on.

The Director of Communications at the Presidency, Mr Eugene Arhin gave the hint at a press briefing at the Jubilee House on Monday evening (September 27).

“Government is already in the process of acquiring a bigger jet for use.”

Mr Arhin was answering a question on whether the government intended buying a bigger aircraft to accommodate the President and his entourage on official foreign trips as the current presidential jet had proven inadequate for the purpose.

He explained that the move to get a bigger fit-for-purpose aircraft was part of a cost saving measure on the travels of the President and other key state functionaries.

Mr Arhin did not give the specifics of the aircraft deal, but said the Defence Minister would shed light on the development at the appropriate time.

He noted that during President J.A. Kufuor’s era, it was planned to purchase two aircrafts, the current jet (Falcon 900 EX-Easy aircraft – 12 passengers minus crew) and a Boeing Business Jet (BBJ) – over 100 passengers and about 40 passengers on VVIP setting – but when President J.E.A. Mills took over office, the bigger one, BBJ was cancelled.

He said it would have made better economic sense to keep the bigger one because when traveling, the entire delegation can all move at a go to help save cost.

Following a recent question in Parliament by the Member of Parliament for North Tongu, Mr Samuel Okudzeto Ablakwa as to why President Nana Addo Dankwa Akufo-Addo has not been using the Falcon Presidential jet for long haul travels in recent times and instead, relying on hired aircrafts, there has been a public debate on the state of the presidential jet, whether it was in good condition and considered air-worthy.

This is not the first time a public debate has ensued over a decision to buy a new presidential jet.

In 2007, when President Kufuor decided to purchase the French-built Dassault Falcon to replace the then over 30-year-old aircraft, which was widely termed as “the flying coffin,” a similar debate ensued and some questioned the need for it.

After the same opposition – NDC – came to power in 2009, President John Evans Atta Mills did not cancel the order completely, and rather cancelled that for the bigger one, BBJ and left the smaller one – Falcon.

In June this year, the Minister of Defence, Mr Dominic Nitiwul in responding to the question on the jet in Parliament said the time was ripe for the nation to acquire a new and befitting presidential jet.

This, he said was because the current Falcon 900 EX-Easy aircraft, used by the President, was not fit for purpose.

“The capacity of the current Falcon aircraft is far below that of Fokker 28 which flew very, very important persons of more than 25 passengers during the Acheampong, Akufo, Rawlings and Kufuor eras hence the urgent need for an appropriate aircraft which can carry better payload in terms of passengers of 70 to 100 people and to carry all their baggage without affecting the performance of the aircraft.

According to him, the presidential jet – a Ghana Airforce Falcon Ex-Easy – could only carry 11 passengers minus the crew and it often had to do “undesirable refueling stops at unintended destinations” during long hauls, causing inconvenience to both the President and the host countries.

To avert such inconveniences, he said, the use of the chartered private jet was critical as the plane could carry more passengers and fly long distances without making stops to refuel.

“Yes, while Falcon Ex-Easy is serviceable and airworthy, the decision to travel particularly to long and multiple destinations such as the President travelling to France, Belgium and South Africa and back to Ghana, especially during the COVID era, would always require a larger capacity aircraft such as a Boeing Business jet (BBJ) or Airbus ACJ 319 not even when the Falcon is airworthy,” he said.

Mr Nitiwul said: “Very, very important persons (VVIPs) or Presidential travel is not about aircraft type or cost but it is all about the safety of the aircraft crew and passengers.”

He explained that it was more expensive not to have a Boeing Business Jet or an Airbus Jet, pointing out how Ghana had to spend over $50m over the last 10 years to airlift soldiers for peacekeeping missions alone.

“If the Air Force has a strategic lift, this amount would have been saved to the treasury,” he said.

Mr Nitiwul told Parliament that the Ghana Airforce, for a long time, had asked for the re-equipping of the Communication Squadron to enable it to perform its functions effectively.

He said former President John Agyekum Kufuor heard that plea and decided to acquire for the Air Force, a Boeing Business Jet (BBJ) and a Falcon 900 Ex-Easy Jet.

He said the BBJ jet, which could carry over 100 passengers and about 40 passengers on VVIP setting, was intended for long haul journeys and to also act as a strategic lift aircraft.

The minister said while the Falcon 900 Ex-Easy Jet was to serve as a backup to the BBJ and also to serve shorter routes but for some reasons, the BBJ order was cancelled by the new government in 2009, with the Falcon 900 EX-Easy being the only aircraft delivered in 2010.

He stated that currently, when the President used the Falcon 900 Ex-Easy Jet, most of the presidential staffers, security details and presidential press corp travelled commercial, with increased cost and its attendant delays.