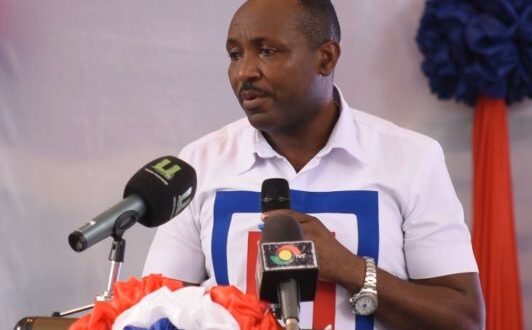 The General Secretary of the New Patriotic Party, John Boadu has stated that the party will deal severely with members who changed the party’s colours at the Fomena Constituency office to NDC colours.

Addressing a press conference held at the party’s headquarters in Accra on Thursday, John Boadu said the act is a gross misconduct and an affront to the party’s dignity.

He noted that the party condemns the disturbances recorded unreservedly, thus has instituted internal investigations into the violence at various constituencies and will take action accordingly.

According to him, the incident in Fomena is surprising because nomination and election modalities have not yet been outlined in the Fomena Constituency.

He added that the members acted upon false information and must be held accountable for their actions.

“We’ve not yet opened nomination in Fomena. So in Fomena for instance, the party is yet to take a decision on the date of opening nomination, date of vetting, date of publication of vetting results and date for holding the polling station elections in that constituency. This will be done and communicated in due course…all those behind this act will be dealt with severely,” he stated.

He added that the disturbances recorded were “a desire on the part of some party officers and members to honour these rules and regulations in breach, rather than in observance”.

Meanwhile, the party said it has halted the electoral processes in some constituencies where challenges have been identified.

“Where it was established that members of the election committee have not acquitted themselves as required by the rules and regulations, the party is holding them accountable and in some cases, we have directed a complete overhaul of the committee ahead of the electoral area coordinators election,” John Boadu said.

On Monday, some members of the governing New Patriotic Party (NPP) in the Fomena Constituency staged a demonstration against the party’s leadership.

The members questioned the rationale behind the exemption of the constituency in the party’s election for polling station executives.

They also threatened to cross-carpet and campaign for the opposition National Democratic Congress (NDC) to win power come 2024.

The angry members were seen changing the party colours of the NPP at the constituency office to that of the NDC.

“We will support the NDC with our over 10,000 votes. I know what we are talking about,” Adansi Fomena NPP Communication Team member, Emmanuel Domah, noted.

They accused the General Secretary of the party, John Boadu; Majority Leader in Parliament, Osei Kyei-Mensah and Regional Chairman of the party, Bernard Antwi Bosiako, of unfairly interfering in the affairs of the party in the Constituency.