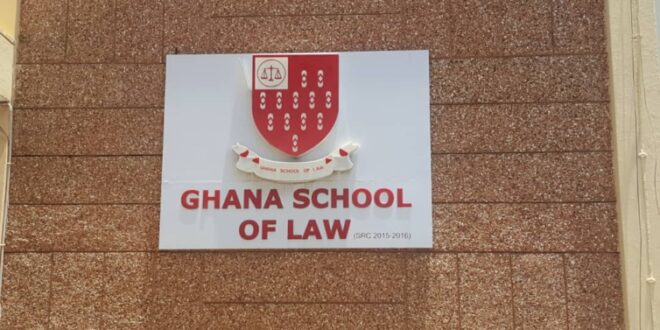 A report by a committee of inquiry set up by the General Legal Council (GLC) has established that 10 students were illegally admitted into the Ghana School of Law.

The Committee is therefore recommending their withdrawal from the school.

Admission into the only school running the professional law programme remains a contentious matter as every year, thousands of students fail the entrance examination.

This has resulted in calls for investigations.

This year, only 790 out of more than 2,000 students who wrote the exam gained admission into the Ghana School of Law.

Some 499 others who had insisted they had passed have since been granted admission following weeks of agitation and legal action.

The investigations into alleged unlawful admission commenced following allegations that some students who took the exam last year who should not have been admitted were admitted nonetheless.

The Council also directed that then Ag. Director of the Ghana School of Law, Maxwell Opoku-Agyemang, the Registrar and the Deputy Registrar should be subjected to disciplinary proceedings.

A copy of minutes of a February 14, 2022 GLC meeting sighted by JoyNews notes the following;

“Council decided that the ten (10) students who were identified in the Committee of Inquiry’s report as having been admitted illegally by the then Acting Director, Maxwell Opoku Agyemang, should be withdrawn immediately from the Ghana School of Law.

The Secretary to the General Legal Council was to convey this decision to the students.

Council constituted a three-member Disciplinary Committee made up of Amoak Afoko, Kwaku Gyau Baffour and Professor Raymond Atuguba to subject the then Ag. Director of the Ghana School of Law, Maxwell Opoku-
Agyemang, the Registrar and the Deputy Registrar to disciplinary proceedings.”.