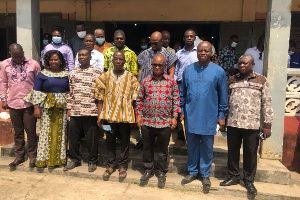 Dr Archibald Yao Letsa, the Volta Regional Minister, has embarked on a six-day tour to the various Municipal and District Assemblies in the region.

The tour would engage the various Assembly staff with a focus on addressing some weak value systems and non-adherence to service delivery standards to enhance performance.

Dr Letsa is expected to engage in sod-cutting activities for the commencement of some projects in the region.

He would also inspect some ongoing projects and project sites across the region.

Mr Foster Honu, Public Relations Officer of the Volta Regional Coordinating Council, said the Minister would start the tour on Wednesday, January 19 with a visit to Central Tongu District, where a sod-cutting ceremony would be held for a Modern Rice Mill factory in Adidome and a visit to some farms in the area as well as an encounter with Assembly staff.

The team would then proceed to North Tongu and South Tongu Districts same day, where similar events would be held.
The first phase of the tour, which would end on Friday, January 21, would cover other Districts, including Akatsi South, Akatsi North, Ketu North, Ketu South and Anloga.

The tour is expected to cover all the 18 Municipal and District Assemblies in the Region.

There would also be interactions with Assembly staff and Heads of Departments and Institutions across the region.