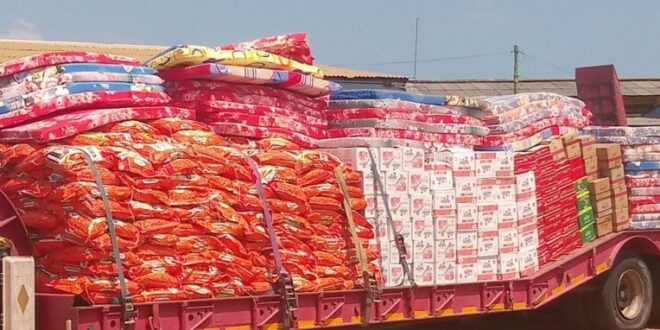 Former President John Dramani Mahama has donated assorted relief items to the victims of last weekend’s storm surge in communities along the coast of the Volta Region.

A storm surge last Saturday and Sunday flooded homes in communities in Ketu South and Keta and collapsed buildings, including homes and school blocks in the Anloga District and rendered about 4,000 people homeless.

Mr Mahama, in a speech Saturday at the forecourt of Keta Municipal Assembly to present the items, said he could not sit and not respond to the cries of the people, who had been ravaged by the sea thus his widow’s mite to alleviate their sufferings.

He said the items were procured through the assistance of some Ghanaians to support the victims.

The former President decried the devastating effects of the ravaging sea on coastal communities, saying the coastal flooding currently happening along Volta’s coast and the Volta River estuary in the South Tongu District as a result of climate change, noting that natural disasters would occur but what mattered was the reaction towards them.

Madam Abla Dzifa Gomashie, MP of Ketu South, said the situation in Ketu South was even dire because apart from suffering from the sea’s attacks, the border on which the majority of the people depended for their livelihood had since been closed, likening it to “killing one fowl and taking two hearts from it.”