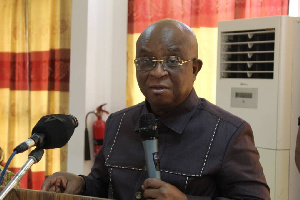 Dr Archibald Yao Letsa, the Volta Regional Minister has called on farmers to adopt innovative ways that will gradually help save the dwindling sectors of agriculture production in the region.

He said though efforts being put in by farmers in the region had placed the area above food-crisis, there was still the need to explore other opportunities in the sector to the fullest.

Dr Letsa who said this at the regional observance of the 38th National farmers day celebration in Agorkpo in Sogakope in the South Tongu District and urged farmers to transform rice by-products into animal feeds.

“There is an area in the rice value chain that needs further attention. That is the transformation of the rice by-products into animal feed. This potential, if harnessed, will once again, put the region in that leadership feat in animal feed development and will save the animal industry which is currently on the verge of collapse,” he said.

He urged stakeholders to consider supporting farmers in the production of tomatoes in its entire value chain since the region exhibits great potential in that area.

“I wish to make a humble appeal or rather throw a challenge to the Association of Ghana Industries (AGI), Volta Chapter, and the Regional Department of Agriculture (RDA), to carefully consider how the region could take advantage of the Governments programme dubbed; Ghana cares ‘’Obatampa’’ project, which is ready to assist bankable proposals come into fruition in areas such as tomato processing,” he said.

The Volta Regional Minister advised the assemblies as well as the clans and family heads to relook at the issue of land acquisition for farming activities since land plays a critical role in all agri-business practices.

“Land acquisition should therefore be streamlined and facilitated by the various Assemblies in conjunction with clan and family heads, to forestall litigation,” he said.

He was awarded a tricycle, knapsack sprayer, Wellington boot, and two wheelbarrows.

Mr Dotse told Ghana News Agency, there are a lot of constraints in farming ranging from land acquisition to finance and called on stakeholders to support the agriculture production in the region.

Five other farmers were recognised and awarded in the district.

The theme for this year’s celebration was ‘’Accelerating Agricultural Development through value Addition,’’ and it was marked alongside the 20th anniversary of World AIDS day which also had theme: “20 years of Multi-Sectoral Response to HIV and AIDS in Ghana: Accelerating progress to end AIDS.”