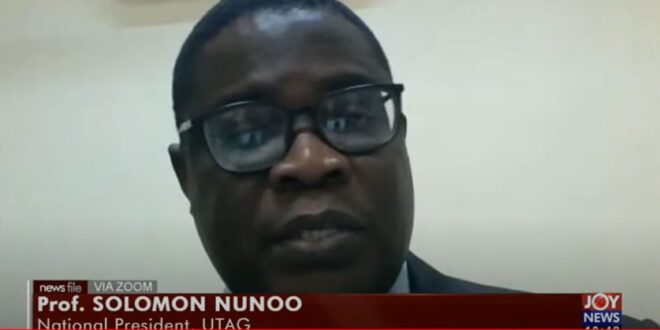 UTAG strike: We’re agitating against the erosion of our salary – UTAG President

The President of the University Teachers Association of Ghana (UTAG), Professor Solomon Nunoo says their strike is not centered on the Labour Market survey as it is being portrayed.

According to him, their strike is to register their dissatisfaction with the erosion of their salary over the past nine years.

He said this on JoyNews’ PM Express, Monday, while responding to statements made by the CEO of the Fair Wages and Salaries Commission, Benjamin Arthur on the show.

“I want to clarify a few things. You see he keeps referring to the government’s white paper on market premium. The same government also talks about the fact that the same market premium needs to be worked on every five years which has not been done so far. So that is a problem in itself.

“Currently as it stands today, the market premium we’re receiving because there was a freeze on it and it has become an absolute value, it’s just about 50% of the basic salary so you’ll notice that there has been a huge erosion when you talk about the money we’re receiving in terms of our market premium at the moment,” he said.

This he says undermines the Association’s faith in the government’s rhetoric that they’ll be able to meet their demands thus urging them to call off the strike.

“So the issues we discussed today at the meeting, basically it had to do with the research allowance, the fact that we had signed the document that from October 6th up till today, today is the 10th of January 2022, we have still not received the difference in research allowance we were supposed to be paid.

“Also, with research allowances, gone were the days that it was always paid in May or June of the applicable year. Last year we received our research allowance well into October; before the money started trickling in slowly. And so these are things that we needed to talk about.”