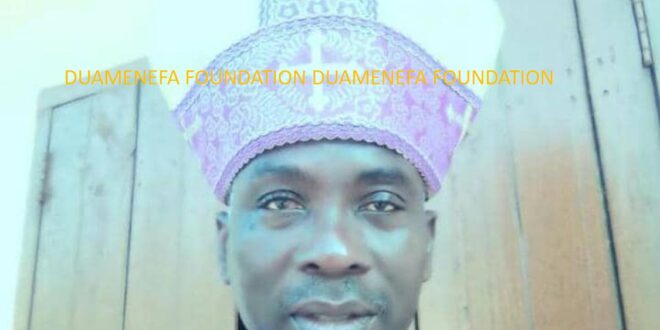 Bishop Cephas Korbla Nyamador, the Volta Regional Base leader of the borderless mission was arrested yesterday the 5th day of July, 2022, by the Aflao divisional police command over allegations of defrauding by false pretenses.

Bishop Nyamador was heard recently on a viral voice recording alleging that his national director Joel Daniel Anku has embezzled and diverted a lot of money the association collected from pastors since 2019, in a bid to provide them juicy packages to alleviate their plights.

The aggrieved pastors claimed they have been duped by the leadership of the Borderless Mission Foundation Ghana of various sums of money under false pretenses.

The arrest took place in the Calvary Charismatic Centre, (CCC) Denu, where a delegation of pastors from the Borderless Mission were holding their general meeting to discuss the way forward amidst the recent confusion and allegations of defrauding by false pretenses that has rocked its operations.

According to our undercover reporter, the meeting was convened through a publication by Bishop Cephas Korbla Nyamador, who posted the circular to their group WhatsApp.

Although the convener claimed in the notice of invitation that their national director, Joel Anku would be available to talk to them, Joel was nowhere to be found during the meeting.

According to our undercover reporter, it took the intelligence of the police CID to locate Bishop Nyamador who took cover between the curtains of the altar as soon as he sighted the Police patrol van.

He was however located under the curtains of the altar where he was arrested and taken to the police station.

He was later granted bail with instructions to report the following day for further investigation into the matter.

Watch out for further development………….