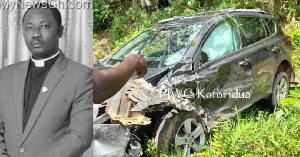 The Resident Pastor for Pentecost International Worship Center (PIWC) Rev. Musa Yahaya has been involved in an accident on the Koforidua to Mamfe Highway.

According to reports Rev Yahaya was in the company of his wife, son and Pastor Michael Fiifi Bortsie who is in charge of Pentecost Students and Associates in Koforidua.

Reports say a vehicle veered off its way and rammed into the vehicle of the Pastor.

The Toyota Rav 4 is said to have somersaulted four times before crash landing upside down. However, the four victims just sustained minimal injuries and have since been treated at Easter Regional Hospital and have been discharged.

Meanwhile, church members have since taken to social media to thank God for His saving grace and have called for prayer for the Man of God and his family.