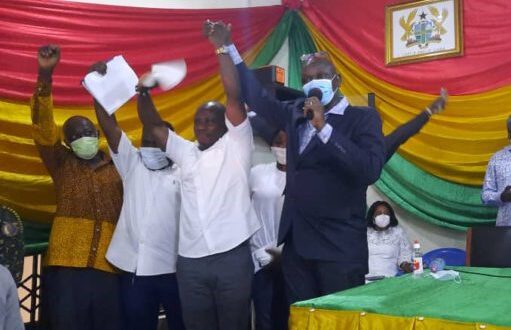 Noble Daniel Awume has been approved as the Municipal Chief Executive (MCE) for Hohoe Municipality.

The 41-year-old Regional Deputy Director of Youth Empowerment Agency (YEA) hopes to build on the successes of his predecessor, Teddy Ofori.

According to Mr Awume, Hohoe has seen progress in the past four years through its Member of Parliament, John Peter Amewu, the Regional Minister, Dr Archibald Yao Letsa and the former MCE, Teddy Ofori.

However “like Oliver Twist, our people are looking up to us for basic needs like water, education, health employment and many more and my aim is to make sure that the needs of the people are met.”

Mr Noble Daniel Awume promised to make sure that women are given equal rights and opportunities. According to him, his door would always be opened for the people of Hohoe.

He, therefore, urged the staff and assembly members to assist him to achieve the success the municipality needs.

“Honourable assembly members,  we are in this together and I need your energy, directions and support because we cannot succeed in the assembly without you so please let’s make Hohoe work better for the good of our people.”

Meanwhile, Mr Awume has expressed gratitude to President Akufo-Addo for the confidence reposed in him and assured to make him proud.

He also thanked the Regional Minister, Dr Archibald  Yao Letsa and the regional Chairman for the New Patriotic Party, Makafui Kofi Wornya and other party executives for their support.

On his part, Dr Archibald Yao Letsa admonished the Assembly members to assist the new MCE so there could be development in the area.