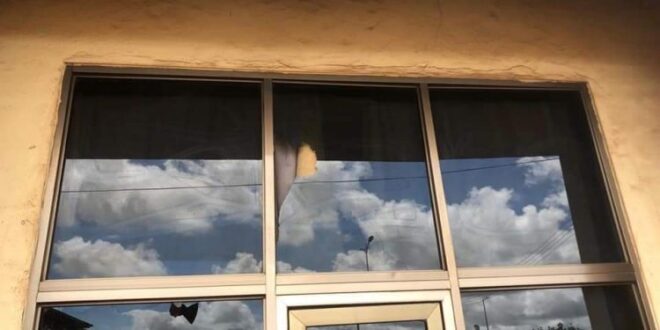 The Lamashegu police station in Tamale in the Northern Region has been vandalized.

The destruction was caused by some youth who took to the streets on Saturday to protest supposed frequent brutalization of residents by police officers in the metropolis.

The protesters marched through some principal streets of Tamale to the Northern Electricity Distribution Company (NEDCo), where they destroyed some properties of the power distribution company.

Afterwards, they moved to the Lamashegu Divisional Command of the Ghana Police Service.

Upon reaching the police station, the irate youth began pelting stones at the police building, destroying the glass doors and windows of parts of the building.

In the end, some vehicles that were parked at the police station were also damaged.

“The youth are not happy with the developments happening in Tamale. This is to show their anger to their leaders. That is why we have traditionally come to the Chief’s palace to express our concerns in a law-abiding manner”, former Assembly Member for Vitin Electoral area, Haruna Mohammed Nburidiba said when he addressed the media on behalf of the protesters.

Attempts by Citi News to speak to officials of NEDCo and the police failed as of the time of filing this report.

Recently, a video circulated on social media in which some police officers were manhandling some residents suspected to have engaged in illegal power connections.

It received wide condemnation from the public, traditional authorities, and civil society organizations in the Northern Region.

Residents who were outraged over the development called on the leadership of the Ghana Police Service to take punitive actions against its personnel over their actions.

NEDCo also apologized to its customers who were assaulted by officers