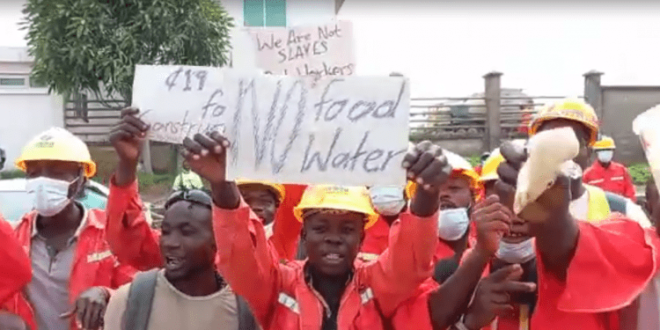 Some aggrieved personnel working on the three-tier Kwame Nkrumah interchange in Takoradi have declared a strike over poor working conditions.

This action comes months after work began on the interchange.

The Warehouse Officer who is the spokesperson for the aggrieved workers, Philip Kogi Owoo, told Citi News their daily wage of GHS19 is not enough.

“Our wage is very insulting. Construction is a very tedious job. This won’t be able to sort out our transportation and food expenses for a day. There is even no water on site for the workers. How are we to cope with the GHS19?”

“We want an increment in the wage. Until this is done, we will not resume work.”

Vice President Dr. Mahamudu Bawumia cut the sod for the project in September 2020 and said it was part of master projects being introduced in the country with the support of the Chinese government.

The first-ever three-tier interchange in the Western Regional capital is to ease traffic flow considerably and reduce traffic time.

The $2-billion SinoHydro-funded project, being executed by Messrs SinoHydro Corporation Limited, commenced in December 2020, and it is expected to be completed in 30 months.

The first tier of the project (26.5metres) will be a roundabout to improve access to the Takoradi Market Circle through the Liberation Road, while the second tier (80-metre span) would link the Agona Nkwanta – Cape Coast road with the third tier (288-metre span) expected to link the Sekondi bypass with the Axim road.