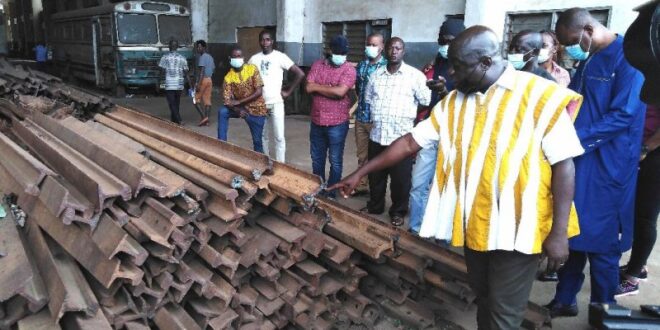 Government of Ghana overwhelmed by mass theft of railway lines

Mr. Kwaku Asante-Boateng, the Deputy Minister, said the country had lost substantial quantities of railway lines over the years through such thefts, lamenting that the development could devastate the sector if not halted.
According to him, the stealing of those lines had become a well-orchestrated and lucrative venture for some people, citing scrap dealers and other stakeholders in the steel industry.
“The Ministry’s investigations have uncovered that some syndicates have specialized in the stealing of railway lines to serve their own selfish interests,” he told the media in Kumasi, after a day’s working tour of the Ashanti Region.

Railway lines spanning several kilometres across the country had been stolen over the years, and according to the Ministry, “this is a well-orchestrated business by some unscrupulous individuals to sabotage the efforts of the government to revamp the sector.”
The most affected areas in the Region, include; Konongo, Ejisu, Juaso, Obuasi, Adum, Asawase, Kaase, Akrokerri, amongst others.
The Ministry estimates that it costs the nation about five million dollars to construct one kilometre stretch of railway line.

Mr. Asante-Boateng, as part of the visit, toured the locomotive workshop at Adum, where large quantities of retrieved stolen railway lines had been kept.
He also inspected some retrieved railway lines at Ejisu, Konongo and Juaso, where the police briefed him on the campaign by the security personnel to identify and arrest those involved in the systematic stealing of those items.
“It is the responsibility of every Ghanaian to be involved in this national crusade given the fact that the government has invested so much in the railway sector,” the Deputy Minister noted.
He hinted that the Nana Akufo-Addo-led Administration had sunk about one billion US Dollars to revamp the sector in order to boost transportation in the country.

Stressing the importance of the railway system in the country’s development agenda, Mr. Asante-Boateng, who is also the Member of Parliament for Asante-Akim South, said it was critical to reducing the pressure on Ghanaian roads to ensure their longevity.
Source: GNA
2021-08-27
fafaafmonline_editor