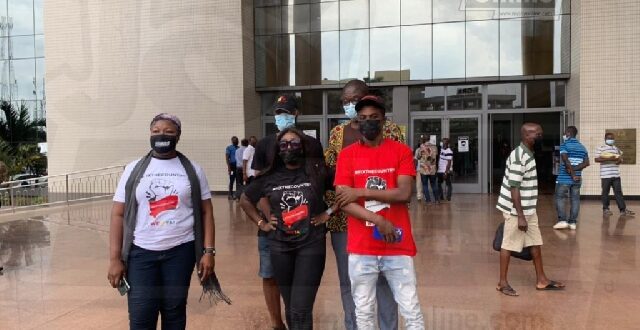 Some #FixTheCountry protestors spotted at the court complex

A Supreme Court Panel presided over by Justice Yaw Appau has set aside a High Court order that indefinitely barred the fix the country campaigners from staging a street protest.

The court held that this order was in error and proceeded to quash it.

In restraining the protestors, the High Court stated that they are not to hit the streets until such a time that the appropriate authority lifts the Covid-19 restrictions on public gathering.

The campaigners insist this order is unlawful as, under the High Court’s rules, injunctions granted without arguments by the affected persons (ex parte) ought to last for just 10 days.

Lawyers for the Campaigners led by Justice Sai on Tuesday, June 8, urged the Supreme Court to speak on the matter. He insisted the order speaks for itself and restrains his clients indefinitely.

The AG however disagreed.

He described the case filed by the campaigners as misconceived and completely unwarranted. He explained that under the High Court rules, Ex Parte orders are to last for 10 days.

He added that by law, the order granted on May 6, stopping the May 9 protest, has since elapsed. He therefore urged the court to dismiss the case since no order is in force which currently bars the protest.

The AG however added that even before the expiration of the order, a fresh application for an injunction has been made by the IGP knowing well that the May 6 order was to last 10 days.

The court in this ruling, noted that the rules of the High Court allows such Ex Parte injunctions to last only 10 days. It thus said the Judge erred. The court therefore proceeded to quash that portion of the order that barred the group indefinitely.

There is, however, another case pending at the High Court, asking that the protestors be restrained from hitting the streets. This is due for a hearing on June 14.