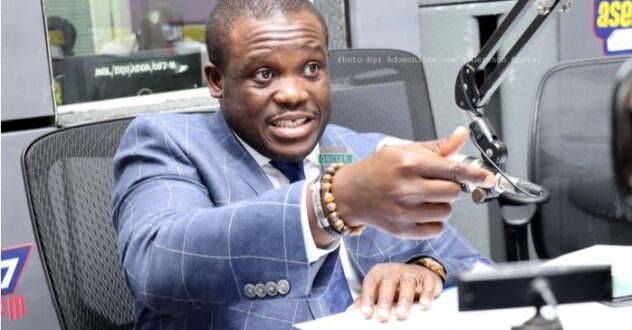 Stop looking for a witchcraft mate; NDC had no intention of introducing E-levy – Sam George to NPP

According to Mr. Nartey George, paragraph 8.7(c) on page 99 of the NDC’s 2020 People’s Manifesto is being misinterpreted as a possible introduction of an electronic levy.

In a Facebook post on Thursday, January 27, he noted that such reports indicating that the opposition party sought to introduce “something similar to the obnoxious e-Levy” are false.

“Let’s set the records straight! I was privileged to work with some very fine brains and Seniors on the ICT sub-committee of the 2020 NDC manifesto team. I am very conversant with the text of the digital initiatives we sought to implement under the next NDC government.

“WE HAD ABSOLUTELY NO INTENTION OF INTRODUCING AN e-LEVY LIKE THE NPP HAS!

“I have seen copious references made to paragraph 8.7(c) on page 99 of the 2020 People’s Manifesto and an attempt to suggest that what we described as ‘a uniform transaction fee policy to guide the electronic payments industry’ was a dream to introduce something similar to the obnoxious e-Levy. Nothing could be further away from the truth,” he stressed.

The MP explained that “as we speak today, there is no uniformity of transaction fees across various EMI platforms. Transacting the same value of money could attract a cost of 0% to as high as 1.5% depending on the platform being used for payment.”

This disparity, according to Mr. Nartey George, is what the NDC hoped to resolve.

He added that: “A quick check with my notes and the attached memorandum to the main committee that contained our technical justifications for our policy proposals would show that we were actually disposed to a uniform 0% transaction fee across the various platforms for on-net transactions and a much lower rate for interconnect transactions.”

According to the Ningo-Prampram MP, equating both policies is as a result of “lazy thinking, poor logic and crass incompetence”.

He, therefore, urged the governing party to “stop looking for a witchcraft mate.”

“It is lazy thinking, poor logic and crass incompetence for anyone with the slightest technical understanding to equate both policies. The obnoxious e-Levy is the baggage of the NPP and they should answer to the people of Ghana and stop looking for a witchcraft mate. The truth remains one!