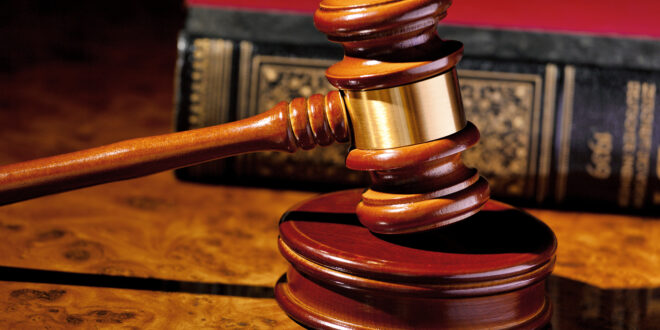 the judge hammer a judge in court. located on a desk.

“May the Almighty God and Allah have mercy on your soul as I sentence you to death” were the last words of the supervising Judge at the Bolgatanga High Court, Justice Charles Adjei Wilson, when he sentenced Mbawona Tindana, a self-styled spiritualist to death for killing his wife and daughter.

Tindana, 35, who had been standing trial on two counts of murder contrary to section 46 of the Criminal Offenses Act, 1960 (Act 29) but earlier pleaded not guilty was found guilty unanimously by a 7-member jury that sat on the case.

Prior to the final decision of the jury, the presiding judge indicated that per section 46 of the Criminal Offenses Act, 1960 (Act 29), the punishment for an accused standing trial for murder is death unless proven otherwise.

Subsequently, after narrating the accounts of witnesses to the case as well as the account of the accused to the fully parked court room on Wednesday (June 1, 2022), he asked the jury to retire to the chamber, deliberate finally and come back with their verdict.

After about 20 minutes, the jury returned and one of them on behalf of the members rose and said “the jury hereby unanimously find Tindana guilty for dastardly killing his wife and daughter”.

Before reading out his judgment, Justice Wilson asked counsel for the accused person, Issahaku Tahidu Lawal, of the Legal Aid Commission if he had something to say but he told the court he had nothing to say.

The judge in his ruling said “so based upon the verdict of the jury, I sentence you to death and that you will be confined in the prison for life and that it is only by a presidential pardon that you can be out of jail”.

“May the Lord God Almighty and Allah have mercy on your soul as I sentence you to death” he concluded.

The visibly sad Tindana, a tall, dark and energetic young man was wearing a white top with a black trousers to match as he stood in the courtroom to know his fate from the Judge’s ruling.

Family members, friends, well-wishers, journalists and members of the public who thronged the court watched as Tindana, sandwiched by security personnel, stepped out of the courtroom.

He was taken away by officers of the Ghana Prisons Service to begin his sentence at the Navrongo Prisons in the Kassena Nankana Municipality.

The facts of the case as presented by Mrs Joyce Debrah, a Senior State Attorney were that Abigail Talata Kurug, aged, 25 and Nyapoka Mbawona Tindana, aged, two, were wife and daughter to the convict respectively.

She said Tindana is a self-acclaimed traditional spiritualist at Kulpeliga, a suburb of Tongo in the Talensi District in the Upper East Region.

She stated that at about 4:30 pm on June 27, 2019, Tindana used an axe to chop off the heads of both his 25-year-old wife, Abigail Talata Kurug and two-year-old daughter, Nyapoka Mbawona Tindana, killing them instantly after accusing them of being witches.

The Prosecutor said Tindana sacrificed the daughter with the brains scattered to appease his idols and abandoned the lifeless body of his wife about 10 metres away from the idols.

Also, Tindana hacked his son with a machete but he managed to escape and was later sent to the hospital for treatment.

Afterwards, the bodies of the victims were retrieved at the scene of the incident and deposited at the morgue of the Bolgatanga Regional Hospital for an autopsy.

An axe and a machete with blood stains on them were also found at where the lifeless bodies laid.

Immediately, Tindana was arrested and was arraigned after investigations had been concluded.