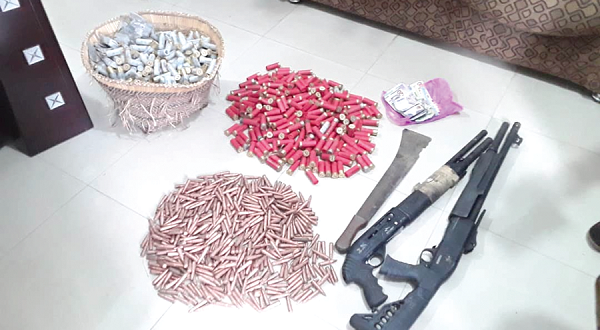 Barely two months after all parties involved in a land dispute between the Doba and Kandiga communities in the Upper East Region signed an undertaking to cease hostilities, the police and military in a joint operation last Wednesday arrested six people at Kandiga for illegally possessing a number of fire arms and ammunitions.

The suspects whose names have been withheld are made up of two males and four females. They are currently in police custody at the Upper East Regional Police Command pending further investigations.

Two pump action guns and over 500 rounds of AK-47 ammunition were also retrieved from two houses located at Kandiga where the suspects live.

Briefing the media in Bolgatanga on the operation, the Upper East Regional Police Commander, Deputy Commissioner of Police (DCOP), Dr Sayibu Pabi Gariba, stated that at about 9 a.m last Wednesday, the police had intelligence that some people around Kandiga had been stockpiling arms and ammunitions with the aim of attacking one another.

In the course of the joint operation dubbed “Cordon and Search”, the security agencies searched a number of houses. The operation was carried out as a result of communal violence that erupted between the two communities in 2020.

The Police Commander observed that the two houses located at two different areas within the Kandiga area breached some security regulations. In one of the houses, two pump action guns were found while in the other house over 500 rounds of AK-47 ammunition were also retrieved.

DCOP Gariba further explained that the owners of the houses where the firearms and ammunitions were seized were currently on the run.

“We have been able to narrow down on them and preliminary investigations show that they are teachers and we have pursued them to their various schools; we are currently doing everything possible to arrest them,” he stated.

The Police Commander gave an assurance that the police would investigate the matter thoroughly to ensure that the laws of the country took their course.

“I don’t think the laws of Ghana will allow one person or individual to keep such rounds of ammunition; the Regional Criminal Investigations Department has been tasked to investigate this matter thoroughly,” DCOP Gariba stressed.

He assured law abiding residents of Kandiga and Doba that the police would continue to conduct intelligence-led operations in the area and the entire region so that people could go about their normal businesses without intimidation and threats.

He advised residents to settle their respective differences in the law courts instead of taking the law into their own hands.

On Friday, May 28, 2021, the Doba-Kandiga Conflict Resolution Committee (DK-CRC) initiated processes to promote peace and ensure that all parties involved in the land dispute between the Doba and Kandiga communities ceased hostilities with immediate effect.

As a result of those initiatives, the chiefs, tindaanas (land owners) and youth leaders from the Doba and Kandiga communities signed an undertaking as part of their respective commitment towards the peace process.

In the undertaking, the parties involved in the conflict pledged to adhere to its provisions by ceasing all forms of hostilities to enable the conflict resolution committee to work out the restoration of peace and ensure that both communities co-existed peacefully permanently.

The dispute in the area is over the renovation of an existing structure for a police station. The two communities share boundary and have over the past years disagreed over the ownership of the piece of land on which the structure earmarked to be renovated and converted into a police station was sited.

As a result, a number of lives have been lost, while properties including houses have been torched in the process.