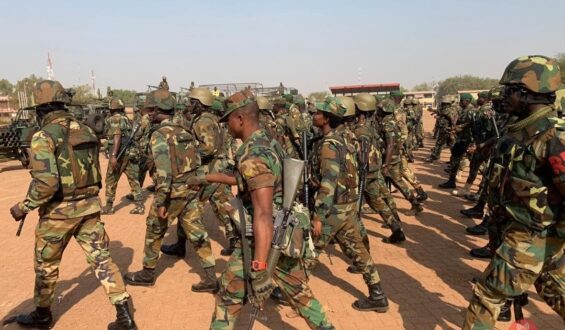 The Ghana Armed Forces (GAF) has dismissed reports that three of its personnel have been arrested for robbery offenses.

In a statement to debunk the reports, GAF said the allegation of robbery has not been established against the three soldiers, hence it is premature for such a conclusion to be drawn by the public.

Referencing a story by The Chronicle which announced the arrest of the soldiers for robbery, the Armed Forces explained that a Nigerian national had reported the soldiers to the Amasaman Police station for alleged extortion, seizure of phones and forced entry into a premise at Nsakina.

The statement further said that based on the report against the soldiers, there was a joint investigation by the Military Police and the Civil Police into the matter.

Subsequently, the “Military Police escorted the three soldiers to the Amasaman Police Station where they were compelled to avail themselves for their photographs to be taken as part of a routine investigation process.”

GAF said preliminary investigations by the Military Police indicate that one of the soldiers had claimed he had monitored suspicious movements in the house occupied by the Nigerian.

Together with his colleagues, they proceeded to the house and after being ushered in by one of the occupants, they noticed some Nigerians busily working on laptops.

According to the statement, the leader of the group in the house denied any involvement in cyber fraud or any criminal activity and offered to report any such activity to the security services.

The story circulating noted that the soldiers scaled a wall into the residence of the complainant and robbed him and his friends of 8 different mobile phones and forcibly made them transfer an amount of ¢850 to a registered MTN number, bearing the name Gabriel Yinsabilik.

GAF proceeded that the alleged extortion and seizure of phones are still been investigated by the Military Police and the Civil Police for the truth to be ascertained.

“It is therefore unclear the motive of the haste in releasing such information with pictures into the public domain on a yet to be determined matter,” portions of the statement read.

GAF noted that it does not condone any criminal act by its personnel and would not shield any soldier engaged in such activities.

The Armed Forces, however, urged “the media and other stakeholders follow due process for the veracity of claims to be made to ensure accurate information is published.”