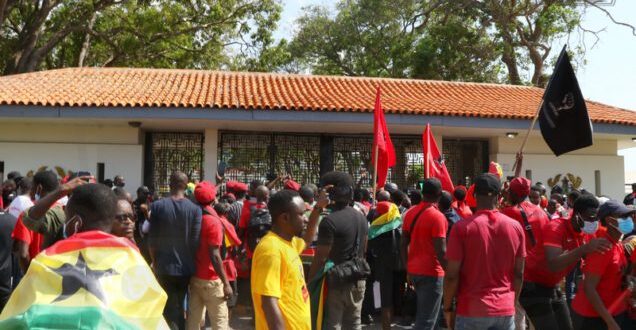 A group of angry protesters who thronged the premises of Parliament on Friday, to present a petition on the 2022 Budget were denied entry by the police, leading to hours of heated verbal exchanges between the police and the enraged protesters.

The protesters, who are members of the #FixTheCountry movement and the Economic Fighters League, argued that they had earlier agreed with the police to walk into the premises of Parliament to present their petition if they were less than five hundred.

However, arriving at the premises of Parliament on Friday afternoon, the police refused them entry, explaining that, they had not received any express orders on the day to grant the protestors entry.

The police, however, suggested that at least ten of the protesters could enter the premises and file their petition accordingly.

This angered the protesters, leading to prolonged altercations between the police command on the ground and the livid demonstrators together with their leaders.

Speaking to JoyNews, leader of the Economic Fighters League, Ernesto Yeboah decried the situation alleging a lack of integrity on the path of the police in the circumstances.

“They told us, that if we were less than 500, they would allow all of us into the house. We’ve tried as much as possible to produce a number even less than 300, and we’re still here. So when we say ‘Fix The Country’, it is also an integrity question. How many of us have the integrity to stand by our words?” Ernesto Yeboah quizzed.

Another protester, who vented his fury told JoyNews that as a human rights activist who believes in demonstrations and has participated in many, President Akufo-Addo could have intervened by speaking to the relevant persons to grant them entry to present their petition.

“Akufo-Addo has disrespected Ghana for so long. In fact, wherever Akufo-Addo is, he knows that this demonstration is going on; and he could have placed a phone call to the Speaker of Parliament or whoever it is. That my fellow Ghanaians are out there demonstrating. They’re pouring out their grievances. Go and listen to them,” he fumed.

The President of the Unemployment Graduate Youth Network, who was also present on the grounds urged the government to devise more innovative means to address the unemployment challenges that have bedeviled the country.

Former President of the Graduate Students Association, University of Ghana Chapter, Chris Atadika, who also partook in the protest bemoaned the proposed 1.75% E-levy and urged government to outrightly scrap the proposition

Meanwhile, Parliament has rejected the 2022 Budget, presented by the Finance Minister on November 17, 2021. The incident occurred after the majority staged a walk-out, refusing to participate in the proceedings relating to the 2022 Budget.