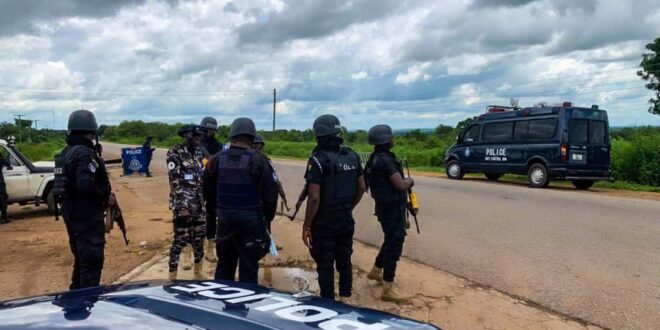 Two suspected armed robbers have been confirmed dead following a reported shoot out between them and a team of police officers. The shootout happened at Zenu, near Ashiaman in Greater Accra.

The police has described the two as part of a criminal gang in the area.

The suspects have been identified as Joseph Dagodzo and Mujahid Abubakar, alias Sule.

They are said to have died at the Police Hospital.

The two were reportedly hit during a shoot out with the police.

They were said to be leading the police to their hideout to retrieve weapons and arrest their accomplices.

The operation also led to the arrest of a 65-year-old suspected illegal arms dealer.

The arms dealer, Bukari Salifu, who is said to be the financier and supplier of weapons to the the suspects was arrested at Zenu near Ashiaman.

A statement signed and issued by the Acting Director General of Police Public Affairs Directorate, Assistant Commissioner of Police (ACP) Mr Kwesi Ofori indicated that the police on Saturday, September 25, 2021, were forced to shoot the two suspected robbers who later died on admission at the hospital.

He explained that the suspected robbers were initially arrested when they attempted to rob motorists along the Koluedor – Sege — Accra main road.

Some of their accomplices allegedly escaped arrest.

After their arrest, the suspects mentioned Bukari Salifu as the one who provides them with weapons for their robbery expeditions when the police interrogated them.

According to the police, the two suspects led the crime-combat police team to the purported hideout of their accomplices in a bush near Zenu under the pretext of aiding the police to retrieve some weapons and assist in arresting their other accomplices, who had escaped from the scene.

However, the Police came under fire while at the scene while the suspects attempted to escape leading the highly trained crime-combat team to return fire, the police said.

The suspected armed robbers were shot in the process and were subsequently taken to the Police Hospital where they died.

Their bodies have been deposited at the morgue of the same hospital.

The statement explained that the arrest of the weapon supplier, Bukari Salifu, was based on police intelligence.

The police, it said has since retrieved a Blow F9-22 Pistol, a locally manufactured pistol and two motorbikes.

In the meantime the police said it was pursuing those on the run and “wish to serve notice that criminals cannot and will not win in any battle against the police.”