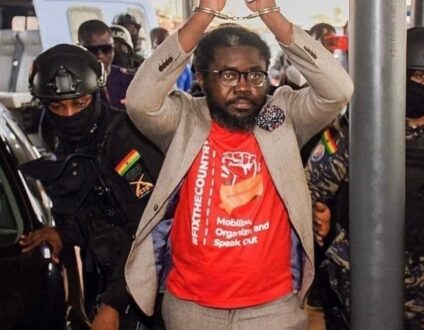 A social activist and lead convener of the #FixTheCountry Movement, Oliver Barker-Vormawor, has revealed that he was not fed by the Police during his prolonged stay in their custody.

Speaking in an interview with the press on Sunday, he narrated some of his ordeals, while in detention over his coup comments.

Mr. Barker-Vormawor said, the conditions in Ghana’s cells, do not guarantee the welfare and happiness of the inmates. According to him, many inmates are poorly treated and left to survive under harsh conditions.

Recounting his personal experience, the activist indicated that for 35 days, he had to rely on food supplied by his visitors; since the Police did not give him any.

“First of all, for all my 35 days in there, not once did the Police come and offer me food, that this is the food that the state has provided them to give to inmates. I had to wait on family and friends who would come and give me food. So that’s the experience of a lot of people in there. There are some who have gone a year and two years and have never received any family coming to see them.

In fact, a lot of them their families don’t know they are in there because the Police often deny them the right to call anybody to inform them they are there. So that’s the experience I went through and I know that there are people in there who are starving’, he stated.

He added that, “When I was arrested and shown in there, I met people who had not eaten for five days, but when I complained about it, I was told by the Police that the people in there are used to it. So it’s inhuman as far as I’m concerned for people to go these number of days without food through no choice of their own and that’s why we are here”.

Mr. Barker-Vormawor made these known, after he and his colleagues paid a visit to the Ashaiman Police Station to make a donation to the inmates. But according to him, he was denied access by the Police, due to an ‘order from above’.

Reacting to the refusal of the Police to allow them donate the items, he explained that contrary to the claims by the Police, he and his colleagues had earlier published their intention to visit the inmates, and therefore the claim by the Police that they are not aware of his coming, is false.

“A lot of them don’t have families to visit them, so we have come together to make a donation of some food items and toiletries which from my experience a lot of inmates lack. Now the Police have informed us informally because we have not yet made the presentation that if we make the presentation they won’t give it out. All we know is that visiting hours are between 4 to 6pm, so we are waiting till 4 to 6pm so that if we present it and they refuse it, then we go home”.

The #FixTheCountry Movement confirmed the release from Police custody, of its lead convener, Oliver Barker-Vormawor on March 17, 2022.

This came 24 hours after he was granted a GH¢2million bail by a Tema High Court on Wednesday, March 16.

The activist is facing Treason Felony charges after a social media post in which he threatened a coup. He is also required to report to the Police once a week.

In a subsequent post, he explained the context in which he used the word, coup.

He was arrested on February 11 at the Kotoka International Airport, upon arriving from the United Kingdom.