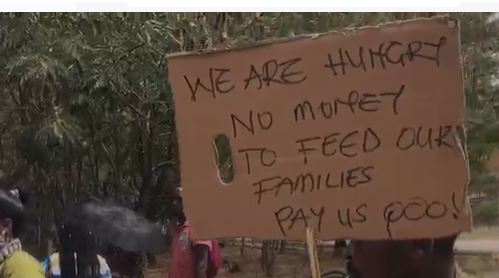 Some personnel of the Youth in Afforestation programme on Monday, February 2022, picketed at the Forestry Commission in Accra to demand better working conditions and the payment of their piled up stipends.

They complained that their allowances had not been paid for more than four months.

They had embarked on similar protests in the past.

They wielded placards with inscriptions such as: “No long talk, pay us our money o”, “No allowance, No Green Ghana” ,“We are hungry, no money to feed our families, pay us oo,” amongst others to express their concerns.

Speaking to Citi News, the convener of the group, Bossman Adu-Twum Anin, indicated that they will continue to stage such actions until their grievances are addressed.

“We are here for one reason, allowances of about 8 months, and for some of our members, 4 months, are still in arrears. We want the Forestry Commission and the relevant bodies involved to pay us our monies, else, we would embark on a mega demonstration where no one can stop us. After they pay us, we want improved conditions of service.”

Adding to the complaints, the Convener stated that each person is to plant 300 trees a day to aid government achieve its aim of planting more trees.

“We are not slaves, the government should pay us. Imagine people coming from far distances to work. We are suffering from hunger and facing humiliation from our landlords. We need to pay schools fees as well.”

”I don’t want to speculate, but after an interview with one of the leaders at the Forestry, he says they are not to pay us. If they are not to pay us, and they cannot go to the Finance Ministry to demand the monies on our behalf but are rather asking us to go to them ourselves, they should stop instructing us to work then,” Bossman Adu-Twum Anin said.

They further threatened to sabotage the government’s tree-planting project if they are not paid.

“We want to serve this caution to the Minister of Lands and Natural Resources that we will not let the “Green Ghana” strive. They [government] should know that we are the conduit through which this programme is surviving.”

“If no leader speaks with us today, we would go home and return tomorrow violently. We would not listen to the police either because they didn’t respect us. Let us come in our numbers and no one should be afraid. We have lawyers who will defend us if anything happens.”