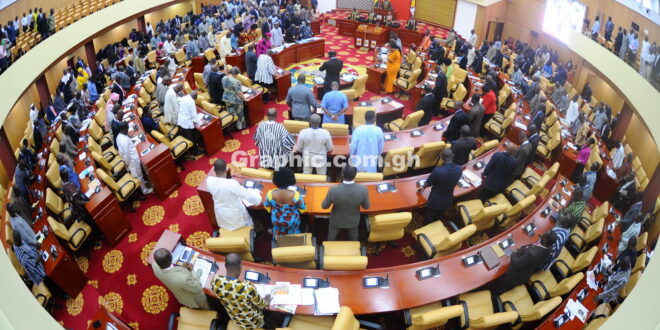 The Speaker of Parliament, Mr Alban Babgin has said the House would be guided by the “richness of common sense and human decency,” in the treatment of the Bill on the Promotion of Proper Human Sexual Rights and Ghanaian Family Values, 2021.

The bill, also known as Anti-Gay Bill, and now with the Constitutional, Parliamentary and Legal Affairs Committee of Parliament, is a Private Members’ Bill championed by eight legislators, seeking to outlaw the LGBTQ+ and adjacent activities, and stipulating jail terms for offenders, sympathisers and funders.

Since its introduction to Parliament, the Anti-Gay Bill has generated a lot of interest with different dimensions as it awaits consideration by the House, which had been on recess since the end of July this year.

Welcoming the legislators back from recess on Tuesday, the Speaker, in an apparent support to criminalise the LGBTQ+ activities, noted that Ghana’s values, cultural systems and accepted practices were different from countries where the LGBTQ+ were being pursued.

Speaker Bagbin, however, said the development of different dimensions of the Bill was healthy for the nation’s maturing democracy and called for the various positions and shades of opinions to be canvassed on the proposed legislation.

“Let us be accommodating of others’ opinions and perceptions because that is the reality,” Speaker Bagbin said, and gave an assurance that “Parliament would create the appropriate environment for a healthy public participation in the deliberation of the draft law.

“I am persuaded that this Parliament will pass a law that is in sync with our constitutional provisions, particularly the provisions of fundamental human rights and freedoms, and the various laws that already exist in this country,” he said.

“I am persuaded that we will pass a law that is rich in common sense, human decency, morality, fact, logic, and one that does not foment hatred in any shape or form.”

During the meeting, which is the Third Meeting of the First Session of the Eighth Parliament, the Minister of Finance will present the Budget Statement and Economic Policy of the Government for 2022 Fiscal Year, and the House will be called upon to approve it.

Speaker Bagbin urged members to keep keen interest and reassert themselves in the budget debate and ensure it responded to the “crying needs” of the Ghanaian people.

He announced his determination to ensure that the Affirmative Action Bill is passed during the course of the meeting and called on the Government to expedite action on the Bill and present it to Parliament for passage.

Also, new Standing Orders, now before the Subsidiary Legislation Committee, will be brought before the plenary.

Other bills scheduled for consideration include the Aged Persons Bill 2021, National Sugary Industry Development Board Bill, 2021, Ghana Standards Authority Bill 2021, the Health Professionals Regulatory Bodies (Amendment) Bill 2021; and a set of 50 instruments will be presented.

In addition, there are seven Private Members’ Motion from both sides of the House to be tabled for consideration.