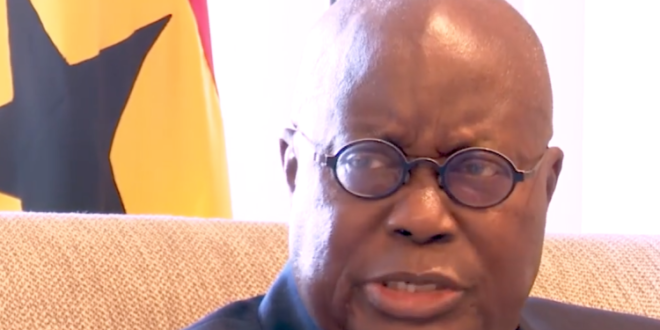 The President, Nana Addo Dankwa Akufo-Addo, has mounted a spirited defence for the Supreme Court after the latter ruled that Deputy Speakers of Parliament can vote while presiding over business of the house, putting to rest the issue which came up during processes to approve the 2022 budget.

According to the first gentleman of the land, the judiciary has the sole responsibility of interpreting the law of the land, and as such, claims by the Minority that the ruling constitutes an interference of the work of Parliament cannot be the case.

He explained that no one is above the law of the country hence Parliament must respect the ruling of the Supreme Court.

“All organs of the state including me [President Akufo-Addo], as the head of the executive, are subject to the constitution. There is no body or organ in the Ghanaian state that is above the laws of the land. To suggest that Parliament should operate without interference is to advocate for the very matter we have tried to avoid, the concentration of power. We have had that experience before and don’t want that,” the President said on Thursday, March 10, 2022.

The Supreme Court, in a landmark ruling on Wednesday, March 9, stated that Deputy Speakers of Parliament can take part in voting while presiding over proceedings of the house in the absence of the Speaker of Parliament.

The judgment was given in a case brought by a law professor, Justice Abdulai, who was contesting the First Deputy Speaker’s decision to count himself as forming a quorum for a vote on the 2022 budget.

The Court also struck down order 109 (3) of the Standing Orders of Parliament, describing it as unconstitutional.

Some have said this judgment interferes with the business of Parliament.

But President Akufo-Addo disagrees with this assertion and was happy with the ruling.

He said he was astonished at “how much public energy has been wasted in an area or issue where there is so much clarity.”

“I am happy that the Supreme Court has unanimously clarified what the constitutional position is. At least we can put this matter to rest and continue with business.”

“Now that the Supreme Court has pronounced, we need to put the matter to rest and continue our work.”

“Let’s support the Supreme Court to do its work,” he added.