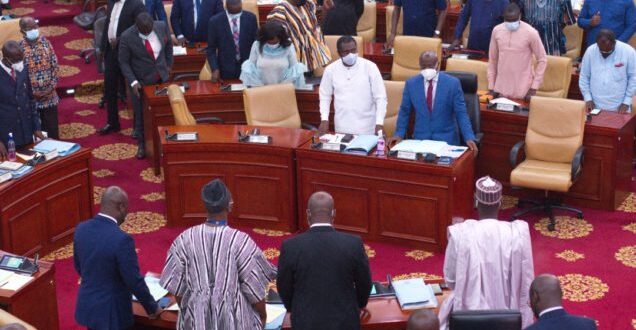 The leadership of Parliament has constituted a bi-partisan Committee to resolve the disagreements over the approval or otherwise of the government’s 2022 budget statement and economic policy.

The Committee is composed of ten members from each side of the house.

The modalities as to how this committee will operate will be set out when the house convenes today, Thursday, December 2, 2021.

However, despite the tussle over the approval or otherwise of the 2022 budget statement, some committees of the house have commenced consideration of the budget estimates for the 2022 fiscal year.

The committees considering the estimates are Roads and Transport, Food, Agriculture and Cocoa Affairs, and the constitutional, legal and parliamentary Affairs.

The Ministries of Railway Development, Roads and Highways, Transport, Food and Agriculture, Parliamentary Affairs, and the Office of the Attorney General are expected to appear before their respective committees to justify the budgetary allocation to be utilized for the 2022 fiscal year.

Recently, there have been some disagreements in the house following the rejection of the budget statement by the Minority on Friday, November 26, 2021, and the subsequent approval by the Majority on Tuesday, November 30, 2021.

For instance, there was chaos in Parliament after the sit-in Speaker, First Deputy Speaker, Joseph Osei-Owusu, gave a ruling which didn’t favour the Minority Caucus.

According to the Minority, it was wrong for the Deputy Speaker who chaired proceedings on Tuesday, November 30, 2021, to count himself as part of the Majority while he assumed the speaker position.

However, after a lengthy debate on the matter, Mr. Osei-Owusu, who chaired the sitting in the absence of the Speaker, turned down the motion.

He subsequently suspended sitting for an hour following the confusion that ensued after his ruling.

But upon resumption, the Second Deputy Speaker assumed the Speaker’s seat and subsequently adjourned the sitting until today, Thursday.

Below is the list of the 20-member bipartisan committee: