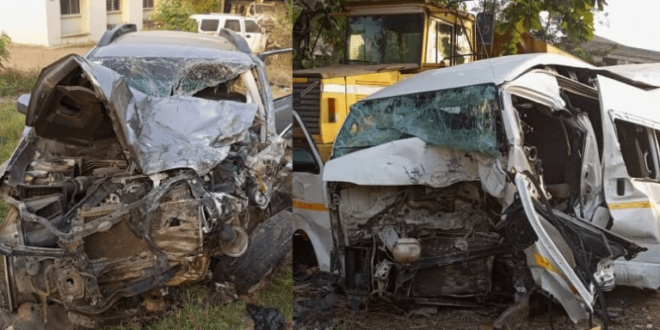 Paramount chief of Kwamang, 2 others die in ghastly accident on Kumasi-Konongo road

Three persons, including the Paramount Chief of Kwamang near Nsuta in the Ashanti Region have been confirmed dead in a ghastly accident on the Konongo-Kumasi section of the Kumasi-Accra road.

Barima Bretwum Okyere Bediako II and two others onboard a Subaru 4×4 vehicle with registration number DV 4446-CD-21  died at the Konongo Odumase  Government Hospital where they had been receiving treatment after the crash.

Known in private life as George Osei Bretwum, Nana Bretwum, aged 41, until his death was also a police officer stationed at the NADMO Headquarters in Accra was said to be behind the steering wheel when the accident occurred at about 7:30 P.M at the end of a 3-lane road on the Accra-Kumasi road.

The police Motor, Traffic and Transport Department situational report says the late paramount chief upon reaching a spot near iron Bird Steel factory on the main Konongo-Kumasi motor road was overtaking vehicles ahead of him.

In the process collided head-on with Toyota Hiace minibus with registration No. ER 884-21 driven by Bright Otu.

He and two others identified as Ernest Osei Obeng and Lydia Asare, aged 38 and 42 respectively died whilst receiving treatment at the Konongo Odumase Government Hospital after sustaining various degrees of injuries.

Their bodies have been deposited at the Stewards  Hospital Morgue at nearby Yakwei.

“If you look at what happened at Konongo, though it is still under investigation, preliminary investigations reveal the accident could be avoided had the drivers exercised some caution.”

Meanwhile, the driver of the Toyota Hiace minibus with registration number ER 884-21,  Bright Out remains in critical condition at the Komfo Anokye Teaching Hospital.

According to Superintendent  Adu Boahene, there has been pressure on the country’s roads as many of them are yet to be dualized.

That notwithstanding, he says drivers must respect all road users,  road traffic regulations and drive with caution to avoid needless loss of lives and property.

According to him, the police MTTD in Ashanti Region is concerned with increasing head-on collisions recorded in road crashes in the region.

Superintendent t Adu Boahene says his out will increase public education to reduce carnage on the roads, especially to reduce the impact of head-on collisions on the roads.

Nhyira FM sources say kingmakers are yet to inform the overlord of the Ashanti Kingdom over the tragic death of the paramount chief who was enstooled in 2019.