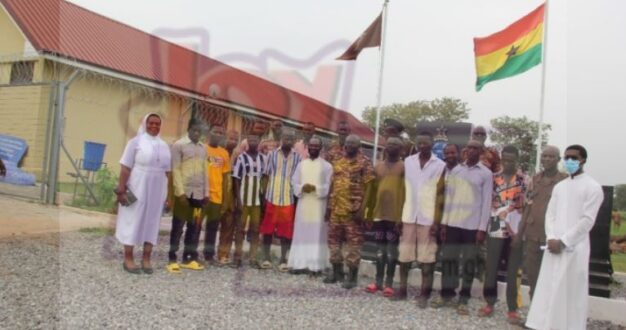 Nine convicts at the Ejura Camp Prisons have regained their liberty after their fines were paid by two benevolent reverend ministers.

The released prisoners say they learnt valuable lessons during their time in prison.

Yaw Debrah, 42 years old, was sentenced to 16 months in hard labour or in default a fine of GHC1,500 for impersonation.

The Kwaso District Magistrate Court convicted him on August 31, 2021.

Debrah has already served 7 months of his sentence at the Ejura Camp Prison.

Daniel Mensah, 30 years old, was sentenced to 12 months or a fine of GHC1,200 by New Edubiase District Magistrate Court, and Richard Obeng’s offence of causing damage led him to 8 months in prison with hard labour by the Bechem District Magistrate court.

The Bekwai Circuit Court, Mampongteng District Magistrate Court and Mankranso Magistrate Court found them guilty of causing harm, possession of stolen property and stealing. They were to pay a fine of GHC1,200 each or serve the prison term.

Kwadwo beat up a Police officer over a piece of land.

“My elder brother is a Sergeant, so I went to beat a Policeman and he said he can’t help me.” Kwadwo said.

Kwadwo’s mother died, and they sold a plot for GHC1,500 to pay off our debt. According to Kwadwo the Policeman who bought the land later said he didn’t like the place.

“He wanted another piece of land or we refund the money, but I told him he had to wait for my uncle to come back. If my uncle comes back, we’ll get some money to refund.”

Kwadwo said he was on a business trip. He told the Police officer that, if my uncle couldn’t pay the money, he would pay it when he returned from my trip.

“Then he (Policeman) went to file a complaint. The case didn’t even happen at my house rather my friends place.” Kwadwo stressed.

The 26-year-old regrets his action and advises friends of his age group not to take the law into their own hands.

“What I will say to those at home is that if anyone slaps you, turn the other side so that they slap you again. Because if you’re looking for revenge, you could end up like me. In my case, I had help, but what about you?.”

The 19-year-old Oppong Edmund who is a pragya driver shares his story of the night before he was accused.

Oppong says he had closed work around 11:00pm when he met a man carrying a sack with items. So Oppong asked the man why he was carrying a sack at that time of the night? Did he want to board his pragya to his destination?

“But he said no, he was going to town to sell his shoes. I told him I needed to see what was in the sack. when he opened it , I saw hair, ointment, ladies Kente and others so I screamed thief! thief! And he took off leaving the sack behind. At first, I wanted to take the things home, but after a second thought, I said that the owner could be in our vicinity and could say that I stole it. So I didn’t take it home. I placed the sack in-front of electrical shop near our house.”

The next morning, Oppong went to inform a porridge seller near his house. But one woman who came to buy the porridge said another complained of her missing items.

Oppong says, “I took her to the items. As we were standing there the woman (owner of the items) and his brothers came to applaud me. Later, people accused me of being the thief.”

Oppong says a CID officer was brought to arrest him and he was jailed.

“The First day I came here (Ejura Camp Prison) it was difficult. It’s not easy so for me. When I go home, I will advise my friends to be careful. If they listen, it’s fine if they don’t, I will just forget them.”

While this is Jonathan’s first time in jail, he has had numerous cases that have ended him in police cells.

“My dad died early so I became a bad kid, which is why I moved to Accra. I always move from Accra to Kumasi and from Kumasi to Accra where I met a friend who told me he saw a motorbike somewhere but he can’t ride. For me, I know how to ride so I went with him to Mankranso to steal the motorbike.”

Jonathan says, on their way, they got stopped by Police patrol team and were asked a number of questions.

“We did not have answers to the questions, hence the conclusion that we had stolen the motorbike.”

Though, Jonathan and his friend didn’t have a key to the motorbike, they found outrageous way of getting the motorbike ignited.

“We didn’t have the keys to the bike, so I connected the wire so when they found, out we were arrested. They sent us to court and we were both imprisoned for two years, a year each or a fine of GHC1,200.”

“For him, his family came to pay for his release, but for me, I didn’t have anybody to help me.”

Jonathan regrets joining a friend to steal a motorbike at Mankranso that led him to prison.

Many people in prison are already poor and unable to pay even the lowest penalties.

When you do evil, evil will come to you. And when you’re a good person and you help others, good things will happen to you.

This principle of karma is an important factor that motivated Rev. Fr. Eric Aninng, Parish priest of St. Patrick Catholic Church at Atebubu and Nsowah Kwasi to pay for the release of nine prisoners.

They expect the nine released prisoners to live different lives that will inspire others to change.

The officer in charge of Ejura Camp Prison, Supt Dickson Owusu Ameyaw says he has been praying for them and advised them to live an exemplary life.

The Ejura Camp Prison has 207 prisoners who have committed petty offenses.