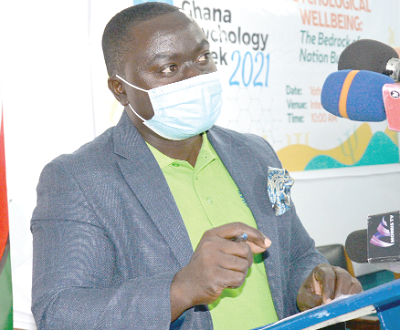 Many media practitioners and personnel in the security services in the country are suffering from “poor mental health state” due to the nature of their work and poor conditions of service, the Ghana Psychological Association (GPA) has revealed.

According to the association, studies conducted into the psychological wellbeing of personnel in the media and security services by some of its members in 2019 and 2020 revealed that personnel in the two sectors experienced what it termed as “emotional constipation” as they could not express their grievances due to their job description.

It said the studies further showed that many personnel in the two aforementioned sectors also suffered from what it termed as “occupational reality shock” as their perception of the profession before they joined was entirely different from what they experienced in reality.

Addressing journalists at the launch of the 2021 Psychological Week Celebration in Accra yesterday, the President of the GPA, Dr Collins Badu Agyemang, said the situation could be largely attributed to the poor human resource management structures in the two sectors.

“We found that many employees within these two industries are experiencing what we call emotional constipation. What it means is that they go through many difficult experiences but because of their job description and the nature of their work, they are not able to speak a word. We also found occupational reality shock; something that distresses a lot of these employees especially when they got on board and realised this was not what they thought the work was about and straight away they become psychologically withdrawn from the organisation,” he said.

Dr Agyemang, therefore, urged media owners as well as the leadership of the various security agencies to prioritise the wellbeing and psychological health of their personnel to enable them to discharge their duties effectively and contribute to national development.

He also appealed to the Ghana Journalists Association (GJA) to push for mental health as part of the training of journalists to empower them to overcome the challenges they may encounter on the field of work.

This year’s Psychological Week celebration which commenced yesterday is on the theme: “Psychological wellbeing: The bedrock of nation building.”

Spearheaded by the GPA, activities outlined for the commemoration include nationwide media engagements and sensitisation, community and school engagements, a lecture on psychological wellbeing, among others.

Dr Agyemang said the association would use the week-long celebration to create awareness of the impact of mental wellbeing on economic and social development and also highlight the essence of the work of psychologists in the health delivery architecture.

For his part, a Senior Lecturer and Social Psychologist at the Psychology Department of the University of Ghana, Dr Wiafe-Akenten Brenya, expressed concern that little attention had been paid to psychological wellbeing as an important aspect of humanity as the focus had always shifted to tangible issues such as hunger, disease and poverty.

He stressed that the mental wellbeing of the citizenry should be taken seriously as it had a direct linkage to productivity and the economic transformation of the country.

“The moment an individual’s psychological wellbeing is adversely affected, it invariably affects the person’s orientation, utterances, actions and productivity,” he said.