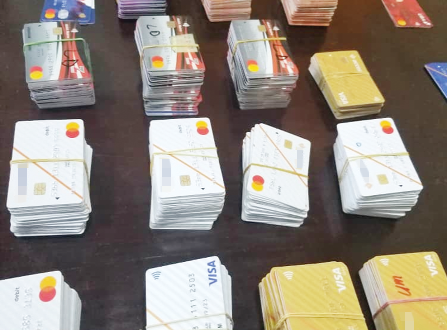 The 42-year-old man who was busted with 656 ATM cards connected to nine banks operating in Ghana and Nigeria has been remanded again by an Accra Circuit Court.

Bachir Musa Aminou, who is facing two counts of electronic trafficking and stealing at the court, presided over by Ms. Evelyn Asamoah, was remanded to allow the banks involved to respond to the prosecution’s claim against the accused person as part of ongoing investigations.

The prosecutor, Assistant Superintendent of Police (ASP) Fuseini Yakubu, prayed the court to adjourn the case to give the banks more time to respond.

The accused person is expected to reappear on October 28, this year.

The facts, as presented by ASP Yakubu were that Aminou, who is a Nigerian, was arrested at the Kotoka International Airport (KIA) for possessing 656 ATM cards in different names.

He said during interrogation, Aminou said the ATM cards were given to him by one Rabiu Suleman based in the Kano State, Nigeria, to be given to one Baffa Bawarije, a Nigerian based at the Daira Night City Hotel in Dubai.

On September 12, this year, Aminou was arrested while boarding an Ethiopian Airline en-route to Dubai.

“A search conducted on the accused disclosed 656 ATM cards bearing 656 different names issued by eight Nigerian banks and one Ghanaian bank,” he said.

ASP Yakubu told the court that investigations further disclosed that the accused person had first visited Ghana on April 29, 2021 through the Aflao border and left for Dubai on May 26, 2021.

He said the accused person’s second visit to Ghana was on August 20, 2021 and was arrested on the day of his departure to Dubai.

ASP Yakubu told the court that the case was still under investigations.