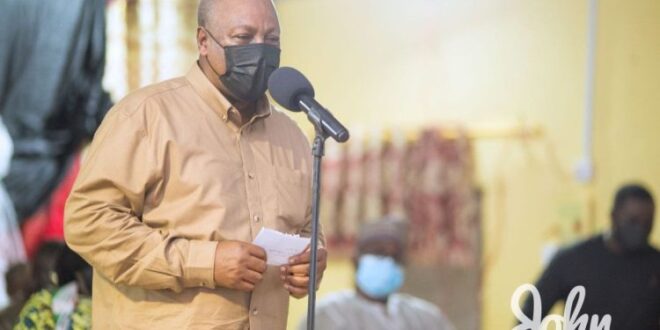 Mahama to take ‘Thank You’ tour to Volta Region on Monday

As part of the two-phased tour of the region, President Mahama will meet the Agbogbomefia, Togbe Afede XIV, and the Asogli Traditional Council.

He will also hold an interaction with Religious Leaders at Dela Cathedral, Ho Kpodzi.

The former President will also grant a live radio interview at Global FM.

Other activities lined up include a visit to the residence of late Comrade Courage Worlasi Danku where he will commiserate with the family and sign a book of condolence in memory of the late Deputy Regional Youth Organizer at Sokode Gbagble.

The second phase of the tour will allow him to pay a courtesy call on the Volta Regional House of Chiefs.

The visit is to show former President Mahama and the NDC’s appreciation to the traditional rulers and the people of the Volta Region for their massive support during the 2020 general elections.

He also toured the Eastern, Western, Central, Bono East, Bono, Ahafo, Western North, and Ashanti Regions of the country where he has been meeting religious and traditional leaders, engage members, supporters, and sympathizers of the NDC, and also interacting with the media.

Key in his comments have been his rebuffing of claims by the Chairperson of the Electoral Commission, Jean Mensa, that the 2020 general election is the most credible poll in the country’s history.