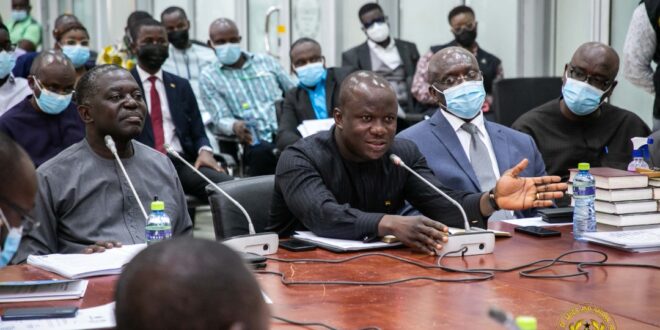 Lands Minister clashes with Chairman of PAC over E-levy

The Minister of Lands and Natural Resources, Samuel Abu Jinapor, clashed with Chairman of the Public Accounts Committee (PAC) of Parliament, James Klutse Avedzi over the Electronic Transaction Levy (E-Levy) during the Committee’s public hearing on Tuesday.

The Committee, on Monday (March 14, 2022) began sitting to consider the Auditor-General’s report on Public Accounts of Ministries, Departments and other agencies (MDAs) for the 2018 Financial Year.

The Chairman had raised concern about MoMo (mobile money) accounts that the Administrator for Stool Lands said they have created for agents collecting rents for the agency in the hinterland to ensure such funds are not kept too long in the hands of the collectors.

The Chairman, however, expressed hope the MoMo arrangement would work and pointed to potential problems for the collectors if the E-levy is approved because that will be a hindrance for the collectors in terms of who would be expected to absorb the levy.

He said, “Let’s hope that this MoMo works and if the amount… You know the E-levy that is coming will be a hindrance to the MoMo but this government is determined to pass the E-levy without considering things of this nature.”

“So Madam, pray that the E-levy doesn’t come so that your people can send the money to you through the MoMo,” he added.

The Minister of Lands, Abu Jinapor interjected the Chairman’s statement and thanked him for admitting that the E-levy is truly coming.

“I want to thank the Honourable for seeing the light but the Administrator has made the point that the rate is at GH¢30.”

“Mr. Chairman, as you know President Nana Akufo-Addo is so sensitive to the poor and vulnerable, and through his numerous policies of free education and several others, which are to cushion the poor, that is why the Levy does not affect any transfer below GH¢100.”

“President Akufo-Addo is so sensitive to the poor and and his policies have always been pro-poor unlike….. But because I’m before you I can’t make any comparisons.”

The Chairman, however, pointed out to the Minister that the money collected daily is more than a GH¢100 and so if they need to transfer in the event that the E-levy is approved, they will be affected.

“Who pays that E-levy,” he quizzed?

Abu Jinpor, in response argued that intervention is required to build the national economy hence the government is not taking it lightly.

“It is intended to build our national economy that was hit by COVID, an economy that has been hit by global commodity prices, that intervention is never ever to punish the Ghanaian people and I believe you know that.”

“It is to reconstruct our national economy for the Ghanaian people so that we can provide them the amenities they ask for; roads and healthcare, and to build this economy and create jobs for the youth of this country,” he added.

The Minister argued the contours and reach of the E-levy will not affect such small transactions and stressed the Ministry of Finance has taken the trouble to go across the 16 regions of the country to hold town hall meetings with the public that this kinds of transfers will not be affected by the E-levy.