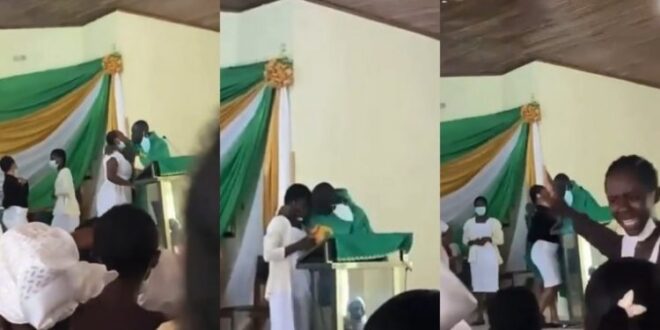 The Anglican priest who kissed three female students of the St Monica’s College of Education in Mampong in the Ashanti Region has rendered an unqualified apology to the church, school, families of the students and others.

Rev. Fr Baltharzzar Obeng Larbi, in a statement issued yesterday, said he was sincerely sorry for the incident and asked for forgiveness.

“I pray for forgiveness from all and sundry and plead that you hold me in your prayers during this trying times. May God bless us all,” the statement said.

He admitted that his actions were wrong and said he should have acted differently “even in the absence of COVID-19”.

“I seemed to have taken a number of things for granted. I did not think my behaviour through,” the statement added.

Rev. Fr Larbi, who was the chaplain of the college, has accordingly apologised to the Anglican Church, his Archbishop, the affected students, the entire college and the general public.

Recounting, he said the unfortunate incident happened during a church service by the College’s Chaplaincy Board in appreciation of the Level 300 students, who would be going for their Macro Teaching (Off-Campus Teaching Practice) when college resumed the next academic year.

“The three students seen in the video performed extraordinarily well and were, therefore, called to be appreciated by the Chaplain. An attempt to add a human touch resulted in the scene in the video,” Rev. Fr Larbi said.

Beyond asking for forgiveness, the Chaplain also rendered an unqualified and sincere apology to “my Archbishop, the entirety of the Anglican Communion, the college, the affected students and their families, and the generality of the public.”

The Ministry of Education and the Ghana Education Service (GES) have also joined the Mampong Diocese of the Anglican Church to investigate the conduct of Rev. Fr Larbi.

Following the public outcry over the video which went viral in social media, the church directed the college Chaplain, Rev. Fr Larbi, to step aside while a five-member committee was set up to investigate the basis of the act.

The committee has already started its work and has up to August 31, 2021 to submit its report to the hierarchy of the church and the school management.

The Principal of the College, Ven. Dr Korankye, who confirmed this to the Daily Graphic yesterday, said the sector ministry and the GES’ parallel investigation would start sitting on Monday.

Again, the Ghana Tertiary Education Commission had also requested a copy of the report of the committee that the church has commissioned, he said.

Ven. Dr Korankye said the college was providing psychological and counselling services for the affected students to ensure that they were not traumatised by the incident and the interest it had generated.

He was seen standing by a podium while the three students walked up to him in turns, where he kissed them on their lips.

Wearing a full cassock, the Anglican priest was also seen urging the students to come to him and remove their face masks.

He then kissed them, amid shouts and jubilation from other students in what appeared to be an auditorium.

The video showed the chaplain urging the third student who seemed unwilling to partake in the act to remove her face mask and receive the kiss.

The student complied reluctantly and also got a share of the kiss, which many have since described as “a holy kiss”.

The matter is also being investigated by the Anglican Church of Ghana under the leadership of the Metropolitan Archbishop of Ghana, Most Rev. Dr Cyril Kobina Ben-Smith.

In a statement, the church said it was saddened by the development and would fully investigate the incident.

“The church is saddened by the news and wishes to state expressly that thorough investigation has immediately been instituted into the matter and the action of the said priest would be dealt with in accordance with the norms and values of the Anglican Communion where morality is extremely revered in the church,” the statement said.