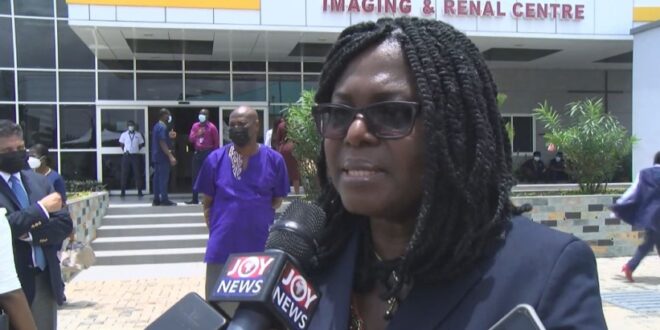 Kidney disease among youth on the rise in Ghana – Medical officers

Medical officials at the Bank Hospital in Accra have revealed the worrying phenomenon of kidney disease among young people.

According to them, the number of young people contracting the disease is rising.

Speaking at the launch of an ultra-modern renal centre at the facility, a senior doctor at the Hospital, Dr Charlotte Osafo, cautioned the public to take preventative steps.

“The main thing that makes people get kidney disease in Ghana – the first thing is hypertension. A lot of people have hypertension, but they don’t control hypertension.

“So, it is important that if you are diagnosed, you also have to do certain things like reducing your salt intake, reducing your weight, regular exercise and eating healthily.

“All those are important, not only for hypertensive patients but also for people with diabetes, because diabetes is also one of the causes of kidney failure.

“Infections are also one of the causes. If you go to the hospital and they say you’ve got an infection of the kidney, and they give you medications, you have to take it,” she urged.

He explained that the insurance system would also help ease the financial burden of persons with kidney diseases.

“The cost of treating one patient on renal dialysis for a year is about GH¢50,700, and I’m sure most families cannot afford that amount for one patient alone; it’s huge, and it’s out of the reach of people.

“So, we also want to set up a renal fund or insurance system that will care for renal cases,” he said.

He further revealed government’s intention to pass a law to regulate the donation of kidneys to patients who may have to undergo a kidney transplant.

“But before we do that, we have to put a legislation in place to back kidney transplant so that people don’t just catch people on the street and remove their kidneys to sell,” he noted.