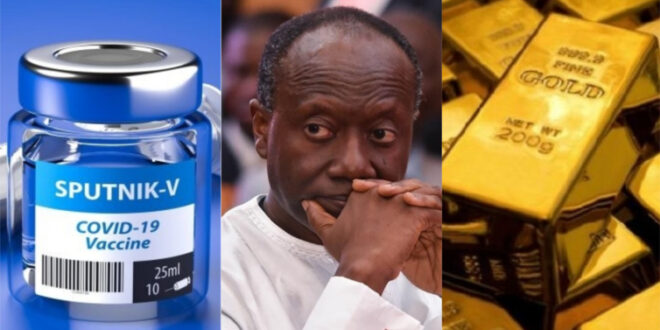 Former Special Prosecutor, Martin Amidu, has added his voice to criticisms about the role of the Finance Minister, Ken Ofori-Atta, in the botched Sputnik V vaccines deal.

The Ministry is said to have ordered the payment to Dubai-based middle man, Sheikh Dalmook Al-Maktoum, for the supply of the vaccines even though parliamentary approval had not been sought by the Health Ministry.

In November last year, Mr Amidu resigned from the Office of the Special Prosecutor (OSP) over reactions surrounding a Corruption Risk Assessment into Agyapa Royalties Agreement, which implicated Ken Ofori-Atta.

He had cited the Finance Minister for bid-rigging among other procurement breaches in the arrangement of the Special Purpose Vehicle.

These reasons culminated in what he believes was the interference of his office’s work leading to his resignation.

Months down the line, allegations of breaches at the Ministry has once again surfaced. This time with the controversial Sputnik V vaccines supply following findings by a Parliamentary Ad Hoc Committee.

Memos made public after a report revealed that the Finance Ministry had ordered payment for the first tranche of Sputnik V vaccines even though the Health Minister, Kwaku Agyeman-Manu, had denied knowledge of any such payment.

The Committee further directed that the Finance Minister takes steps to retrieve the GHS16 million paid for the supply of the jabs, which the Deputy Majority leader Afebyo-Markin says has now been effected.

The former Special Prosecutor said the refund is not enough to put the issue to bed.

“Does the alleged refund of the sum of $2,470,000 out of the initial unlawful part payment by cousin co-President and Minister of Finance, of a sum of $2,850,000 render constitutional and legal the initial payment including the 20,000 doses of the Sputnik V Covid-19 vaccines delivered by Sheikh Ahmed al Maktoum, representing $380,000 of the unconstitutional international business and economic procurement transaction?” he wrote in his latest epistle titled, ‘Do not be like Thomas whose eyes could not see; Akufo-Addo’s Sputnik V, Agyapa and other affairs’.

Anti-graft campaigner, Martin Amidu, sees Ken Ofori-Atta as an outlier in the pattern between the Agyapa and Sputnik V arrangements.

“Paradoxically, this was the same co-President and Minister of Finance who had himself gotten away with the aborted parliamentary approved Agyapa Transaction upon the exercise of executive veto by his co and de jure President that resulted in the resignation of the Special Prosecutor in November 2020,” he said.

In his latest epistle, Mr Amidu suggested that the probe is another attempt to shield the culprits he describes as belonging to ‘The Family.’

In the June publication, which brought the issue to the fore, Finance Minister was interviewed by a Norwegian investigative journalist on the rationale behind purchasing the vaccine for $19 per dose.

Portions of Mr Ofori-Atta’s response read, “You are confronted with “the good guys” from the West not giving you any assurances of supply [of vaccines], and you have 30 million people and are to save lives.”

“You know, it’s easy to sit somewhere else and say: Why are you doing this? But you need to make sure you protect your people. You manage that as well as you can. This is all a contrived and manufactured crisis because clearly, there are enough [vaccines] to go around if only there was equity and justice in what we are doing,” the Finance Minister told Markus Tobiassen.

Against this backdrop, Mr Amidu does not see how the Finance Minister can be absolved of any wrongdoing.

“Any rational and patriotic Ghanaian who did not, therefore, reasonably foresee the President’s position on this matter after the pronouncements of the co-President and Minister of Finance at the two interviews has not analytically followed the policy and decision-making history of this Government,” he said.

Martin is not the only person who thinks it will be inadequate for the buck to stop with just the Health Minister, Kwaku Agyeman-Manu.

Private legal practitioner, Martin Kpebu believes the “unprecedented level of breaches” in the deal makes it difficult to fathom that it was brokered by the Minister alone.

Mr Kpebu has thrown his weight behind demands for a wider probe and called on the Minister to come clean on who called the shots regarding the payments if he insists he had no hand in it.

“So is it the Finance Minister who usurped his powers, he should talk… Is Mr Agyeman-Manu saying that Mr Ofori-Atta is usurping his powers?” he quizzed on August 10.

He rehashed the sentiments later on Newsfile last Saturday, claiming that the Health Minister may be taking the fall for someone.

“The point is that he comes to Parliament with a letter, on the 15th of July, that Sheikh Dalmook Al Maktoum has withdrawn. But on July 25, the response from the Sheikh’s office to him is that I will refund the money when I receive a termination notice, so it means the agreement is still in force, yet he said the Sheikh has terminated, you’ve come to show us a letter.”

Meanwhile, the Communication Officer of the opposition National Democratic Congress (NDC), Sammy Gyamfi, says the two Ministers could face up to five years in jail for breaching the Public Financial Management Act (2016).