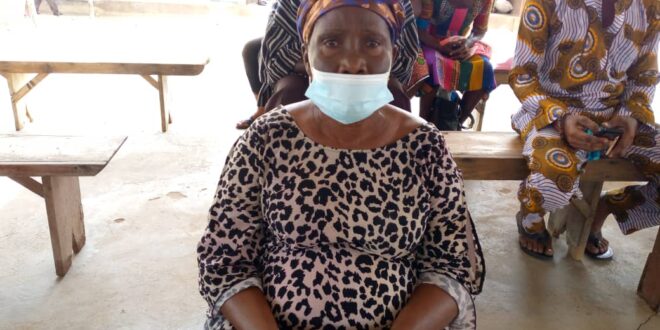 Tettevikorpe is a peaceful community located in the Keta Municipality of the Volta Region of the Republic of Ghana. The inhabitants are fishermen, farmers and traders. The community also boasts of educated elites who are found in all sectors of the society.

Unfortunately for the people of Tettevikorpe, their 14-year-old young, promising and intelligent boy (name withheld) is allegedly locked down through the invocation of the wrath of the gods by the cult devotee, Madam Fatuma Deku. Madam Fatuma claimed during the Duamenefa Social Intervention program of Fafaa 100.3 Fm Dzodze, that she invoked the wrath of her gods to revenge the indecent insults thrust at her by his grandmother who was involved in a quarrel with her over a mango plantation.

All efforts by elders of the Deku family to reconcile the two sisters proved abortive. The matter was referred to their traditional ruler, Togbi Tetteagbi III for settlement, but the two sisters refused to heed to Togbi’s verdict on the resolution.

All attempts to exorcise the gods to free the young boy could not yield the desire results, hence, the Duamenefa Foundation of Fafaa Fm was petitioned by Madam Esther Kutorzi for an independent investigation into the allegations.

The Duamenefa Foundation of Fafaa Fm in consultation with the directorate of National Commission for Civic Education (NCCE) referred the traditional arbitration to the palace of Togbi James Ocloo V, the divisional chief of Keta for further investigation and intervention due to suspicions of conflict of interest at the arbitration court of their traditional ruler Togbi Tetteagbi III.

Togbi James Ocloo V invited other relevant traditional rulers including Togbi Tetteagbi III, the investigation crew of the Duamenefa Foundation of Fafaa Fm, the Ghana Police and the NCCE to support him to unravel the mysteries behind the strange allegations.

During the traditional arbitration, the two women requested to be subjected to their traditional oracle belief system of Ifa divination for their gods to speak through the medium of Ifa. The chiefs agreed and the divination was conducted to satisfy their curiosity and to set the innocent boy free.

Their oracle’s manipulations allegedly confirmed that the earlier method used by Madam Fatuma Deku to exorcise her gods was not properly done. It was also revealed that the boy was also fed with charmed food as claimed by his fetish priest grandmother.

Madam Fatuma Deku who believes in the art of sorcery and divination admitted the outcome of their traditional methodology and agreed to perform the necessary rituals to set free the innocent boy.

According to the grandmother, the boy regularly manifests by shouting and stretching in a movement resembling a python and he cannot sleep; he is always shouting and crying through the night. He suffers the same attacks, even in the classroom. Whereas prior to her quarrels with Fatuma, the boy had been enjoying very sound health conditions.

This unusual demonic attack has continued for the past four years and all orthodox medical solutions sought at renowned medical facilities yielded no positive results, therefore, she keeps consulting her gods for the solution and the gods kept pointing at Madam Fatuma Deku as the principal manipulator of the powers against the boy.

The team of pastors of the Duamenefa Foundation of Fafaa Fm earlier, on one occasion, delivered the boy through Christian Prayer intervention, but unfortunately the family members of the boy are not Christians, but traditional deity practitioners, hence the attacks continue.

Yesterday’s community arbitration and intervention at the palace of Togbi James Ocloo V is expected to bring to final resolution and reconciliation for total freedom of the young boy who is likely to go back to school immediately.

Even though his colleagues are about to write their Junior High School Certificate Examination, he will go back to continue from primary class five.

The Chiefs and people who witnessed the timely intervention of the Duamenefa Foundation praised God almighty for empowering the Foundation to stand in the gap for the vulnerable of the society.

Reconciliation of the Two Spiritual Antagonists

The Duamenefa Foundation of Fafaa Fm is a Non-Profit Organization made up of over 16,135 volunteers in most communities of the country of Ghana and abroad.

The core mandate among others is to serve as community watch dogs to investigate hitherto antagonistic spiritual manipulations and infringement on the fundamental human right of the vulnerable of the society and to collaborate with relevant stakeholders to set the captives free.

This is the 423rd number of successful conflicts resolved and lives saved on records over the period of 10 years of its operation to the glory of Jehovah God almighty!