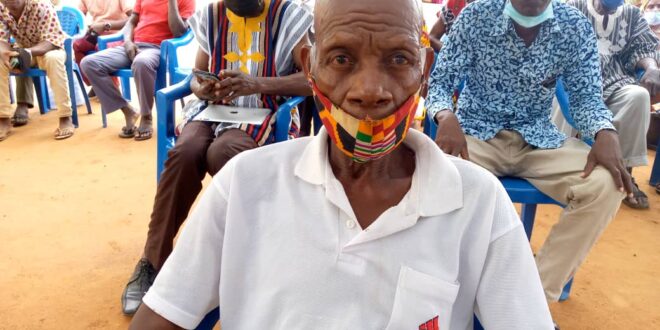 “I AM STRUGGLING BETWEEN LIFE AND DEATH”

“I am struggling between life and death. Please save my life”.  The above quote was the lamentations of Mr. Awuku Awudu in a petition to the Duamenefa Foundation Social Intervention Non – Profit Organization of Fafaa 100.3 FM Dzodze.

According to the petition dated 13th December 2020, and addressed to the Executive President of the Foundation, Mr. Emmanuel Ketaman Evortepe, Mr. Awudu alleged that over a year and half ago, he went to their farm to cut a log meant for construction of furniture and on his way back home he met his uncle, Mr. Kuma Bebefu who pointed a knife behind him with the following words of threat “the log is located on the boundary of our plots and why do you have to cut it? We shall see if you would live to use the log for its intended purpose.”

He further alleged that ever since his encounter with his uncle, he became seriously sick and bedridden. He further stated that he used to have terrifying dreams during his sleep where he would see the uncle chasing him with a cutlass and other objects and he has been unable to sleep for the past one and half years. All attempts to seek orthodox medical diagnosis to this unforeseen development in various hospitals all this while could not point to any medical condition, hence, he believes his uncle used diabolical means to attack him.

All efforts to resolve the matter through the intervention of their youth wing chief, Ako Abusah could not yield results, because according to him, Mr. Kuma Bebefu refused to honor the invitation, hence the family directed the petition to the Duamenefa Foundation of Fafaa FM for investigation and intervention.

The timely investigation and intervention of the Foundation compelled the traditional authorities of Akatsi North and Ketu North to invite other relevant stakeholders to a community intervention at Metrikasa Gborglakorpe to rescue the young man.

NCCE Representatives Present at Arbitration to Educate on 1992 Ghana Constitution

The intervention yielded the desire results as the hitherto antagonistic families were duly reconciled by the chiefs Mr. Kuma Bebefu agreed to join efforts in all requirements, traditionally and otherwise to see to the healing processes and procedures to save the life of Mr. Awuku Awudu, his nephew.

The Duamenefa Foundation of Fafaa Fm would follow up with further development towards the total recovery of Mr. Awuku Awudu.