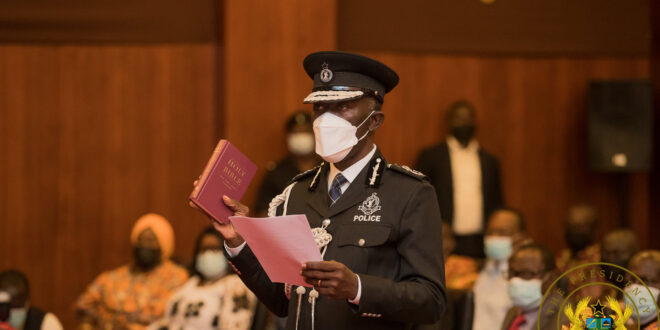 The Inspector-General of Police (IGP), Dr George Akuffo Dampare last Sunday arrested a driver on the Kumasi-Accra Highway for allegedly driving carelessly and endangering the lives of other road users with a Toyota Landcruiser V8.

The driver, identified as Danso Gilbert Tweneboah, 29, was with one passenger on board the vehicle.

Police sources who confirmed the arrest said the IGP arrested the driver who was driving carelessly at about 12:30pm on Sunday, November 28, 2021.

The sources said the IGP was travelling on board a service vehicle number, GP 1 on the same road and pursued the driver until he caught up with him.

The IGP was travelling on the Accra–Kumasi highway and on reaching Akyem Nsutam, there was a traffic jam causing vehicles to move at a slow pace.

The driver of a Toyota Land cruiser V8 with registration number GB 3729-20 who was also on the Anyinam road towards Accra failed to observe traffic ahead and drove through the opposite lane forcing vehicles in that lane to use the shoulders of the road.

When MTTD personnel handling investigations into the case checked Tweneboah’s vehicle insurance using the National Insurance Code *920*57# it revealed that the vehicle was a Toyota Vitz and not a Toyota Land cruiser V8.

Tweneboah was then detained and the vehicle was also impounded while the Kyebi police continue with investigations.