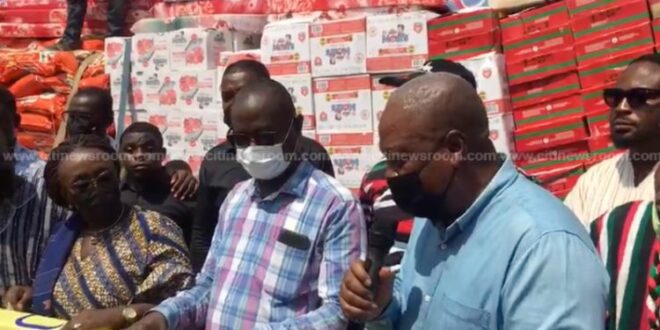 Speaking during a visit to some affected communities, Mr. Mahama said, “even if you cannot provide them with anything, just a visit to show that you care about them is important.”

His visit to the area was to provide some relief items to the hundreds of residents in the Anlo district, Keta, and Ketu South Municipalities who have been displaced.

He donated 1,000 bags of rice, 3,000 mattresses, 2,000 pieces of canned fish and tomatoes, boxes of Nido and Milo to affected persons after addressing supporters at the Keta Municipal Assembly.

The government has had some representation on the ground, with the Coastal Development Authority (CoDA) offering some support to fisherfolk whose livelihood has been affected.

But no significant relief efforts have been seen from the central government.

This response has been criticised, and Mr. Mahama said the Akufo-Addo administration was to blame for the limited support offered by the National Disaster Management Organisation.

“They [NADMO] don’t have the items, and I don’t blame them. It is the fault of the administration because they are not given the sufficient resources to be able to respond.”