Breaking News
Home / NEWS / ‘If government had the means, they’d give it to you’ – Dominic Nitiwul to striking teachers 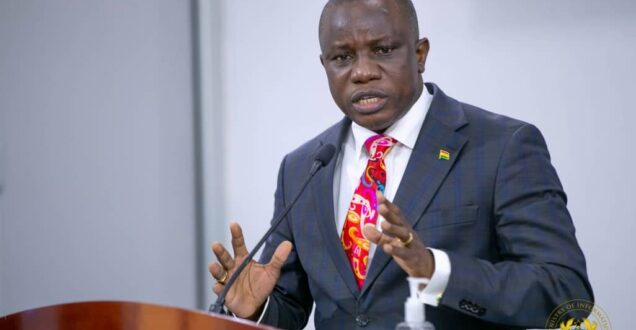 ‘If government had the means, they’d give it to you’ – Dominic Nitiwul to striking teachers

Defence Minister, Dominic Nitiwul, has pleaded with workers unions to exercise patience with the government as it negotiates with the International Monetary Fund for a bailout.

According to him, if the government had the means to meet their demands, there would be no need for the ongoing strike actions some of the unions are on, thus called for cool heads to prevail.

His statement was in relation to the threat of instability as a result of the frequent strike actions and threats of strike due to the harsh economic conditions the country is currently facing.

Already, all unions in the pre-tertiary educational sector have embarked on an indefinite strike calling on government to pay them a 20% Cost-of Living-Allowance (COLA) to augment their rapidly eroding salaries amidst high inflation levels and soaring fuel and food prices etc.

Other workers unions demanding same benefits have threatened to embark on their own strikes in the days ahead should their demands fall on deaf ears.

Reacting to the situation, Dominic Nitiwul said the recent agitations, especially now that the country is headed to the IMF puts Ghana in a tight spot.

“Can you imagine you’re leading an IMF team and workers are asking for between 6 to 8 billion extra income or extra expenditure on the budget? It makes your work very very difficult. I just plead that yes, things are difficult, we all accept.

“It’s not the fault of the worker that maybe if he was earning 3000 Ghana cedis yesterday that 3000 may buy less things. But like I said let’s plead with everybody to give government the opportunity to negotiate very well with them.

“But I really really worry that whatever we do we should look at our kids and ensure that we don’t leave a country where tomorrow those kids will find Ghana a different place. We’ve managed ourselves  very well up till now and we’ll continue to do whatever we have to do to keep this country very safe, extremely very safe,” he said.