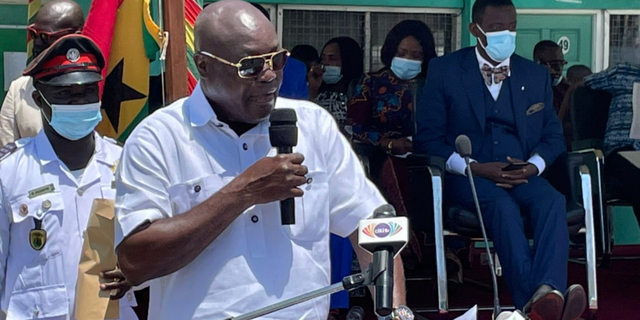 The Chief Executive of the Sekondi-Takoradi Metropolitan Assembly, Abdul-Mummin Issah, has been recorded insulting and threatening violence on a police officer after he was stopped for driving dangerously.

At a point during the encounter, Mr. Issah says he would have killed the police officer if he had been manhandled in anyway during the incident.

“If you had acted otherwise, I would have beaten you to death,” the MCE said.

There is also a quick scuffle where the police officer says “you are attacking me.”

It also appears like the MCE tried to snatch the police officer’s phone, as he had been recording the encounter as evidence.

“You are snatching my phone? You can’t snatch the phone,” the officer says.

Aside from the threats of violence, the MCE also fired a barrage of insults at the police officer calling him ugly, among others.

“You are stupid, you ugly policeman, you say a whole police officer, you are nothing. Don’t worry, let him play his King Kong thing, I have exercised patience for you to call whoever is coming, I could just pass by and there is nothing he can do. If I decide to pass by what else can you do,” Mr. Issah said.

The Policeman during the altercation was heard saying that he was a professional who will not insult him back, but would ensure that he faced the law for driving dangerously and putting his life at risk.

Mr. Issah has since been arrested by the Western Regional Police Command and charged on three counts of Assault of a public officer, Offensive conduct conducive to breaches of peace and disturbing the peace in a public place.

He has also been charged for Dangerous driving for his actions at the snap check point at the Kwasimintsim Cemetery on Wednesday, 2nd February 2022.

The MCE, a known personality in the metropolis, served as NPP Chairman for the Takoradi Constituency for a long time before he was appointed following the death of the former MCE K.K. Sam.