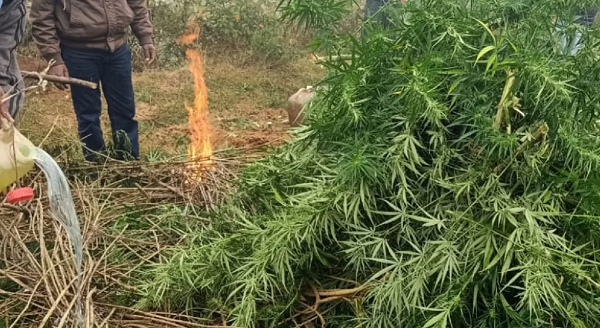 The Narcotics Control Commission (NACOC) has discovered and destroyed a large cannabis cultivation (wee farm) at Liati Dafonu in the Afadjato South District of the Volta Region.

A team of officers made up of 70 officers from NACOC, Ghana Immigration Service (GIS), the National Investigation Bereau (NIB) and the Hohoe Divisional Police Command stormed the plantation at about 7 am Thursday (February 3, 2022) to destroy the farm.

It is unclear who owned the farm as the farmers who were on the farm absconded.

However, four farm workers, a male and three females have been arrested and assisting with investigations.

The security officers discovered the farm on Tuesday, February 1 and made the arrests. They returned to the farm Thursday morning to destroy it.

The large cannabis farm, dotted in various parts of the forest, reportedly belong to different individuals who have planted corn to serve as boundaries between their respective farms.

The farmers had strategically laid irrigation pipes from a nearby stream to the farms to irrigate the cannabis, enabling them to produce all year round irrespective of the rain pattern. They have also connected electric power to the farmlands to boost their activities.

The team also discovered a number of water pumping machines, two motorcycles, a tractor in sheds, which serve as resting places for the farmers.

Briefing journalists after the destruction exercise, the Head of Communications and Media Relations at NACOC, Mr Francis Opoku Amoah said per the new Narcotics Control Commission Act, Act 1019, section 39, it is illegal for any individual to cultivate the herb.

He explained that although section 43 makes special provision relating to cannabis cultivation, it does not give people a blank cheque to go into the large size of farming.

He said farming of cannabis must be done with a licence and its production must not contain more than 0.3 per cent Tetrahydrocannabinol (THC) for industrial and medicinal purposes.

On the arrests, Mr Amoah explained that the four farmhands arrested on February 1, 2022 included a 13-year-old girl, and two others, a 16-year-old lactating mother and an 18-year-old pregnant woman. The three have been granted bail.

But the fourth person, a 29-year-old male has been remanded in police custody at the Hohoe Police Station.

The Officer in charge of the Ghana Immigration Service Operators Team in Hohoe, which did the initial recce of the area, Assistant Superintendent of Immigration, (ASI) David Tindan, said they recieved information from their Commander in charge of Operation Motherland, Chief Superintendent of Immigration, Leslie Martin about the activities of the “wee” farmers and followed it up with an ambush on Tuesday, February 1, 2022, which led to the arrest of the four suspects who were handed over to the police.

He said they later relayed the message to the NACOC and NIB who came in to conduct the destruction and take up the matter for further investigation.