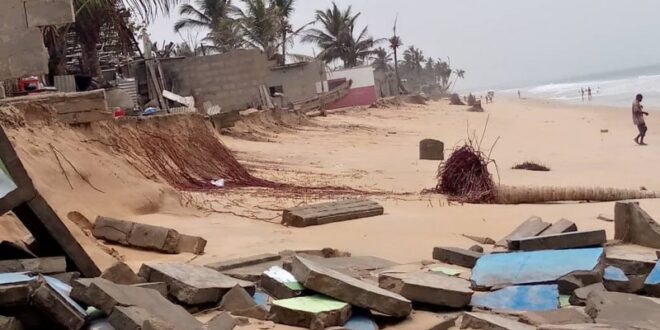 “I feel your pain” – Torgbui Sri to tidal waves victims

Torgbui Sri III, the Awoamefia of Anlo says he is saddened by the damage caused to Agavedzi and Salakope communities by the sea.

The two Ketu South coastal communities portray a disturbing scene, where residents are practically living with the sea as effects of tidal waves eroded the ridges and leveled the dunes, allowing free flow of the sea in and out of homes.
Currently, the stretch has just single houses separating the sea and the Aflao-Keta Road, following recent sea attacks which collapsed about 100 homes and displaced about 1,000 residents.
The residents are forced to sleep in the open with others also settling at safe portions beyond the Keta Lagoon.
Torgbui Sri, who said he felt the pain of the people during these difficult times, was travelling to Denu when he met roadblocks residents of the tidal waves hit communities mounted from Agavedzi in protest to demand the construction of sea defence wall in their area to protect them from the ravaging sea.
The Awoamefia, who strolled to the sea to assess the devastation, interacted with Torgbui Akponoguia IV, Chief of Agavedzi, Assembly members of the affected communities, and few residents, especially women on the way forward to first clearing the road for users and getting their concerns addressed.
He said, “we’re one and whatever affects you, affects me” assuring that he would put in words to the President of the Republic on their behalf to quicken the extension of the sea defence project from where it had stalled to cover the other communities to protect them against the effects of the tidal waves.
He disclosed that similar words were put in to have the current project at Blekusu-Agavedzi and that though Amandi, the contractors had left, efforts would be made to have them back to continue the project to safeguard lives and properties.
Torgbui Sri after the separate interactions with the stakeholders went back to use the Anlo-Afiadenyigba Junction Road to get to Denu that afternoon.
The roadblocks, which were initially planned to remain until assurances from the President, were removed later in the evening.
GNA
2021-06-05
admin