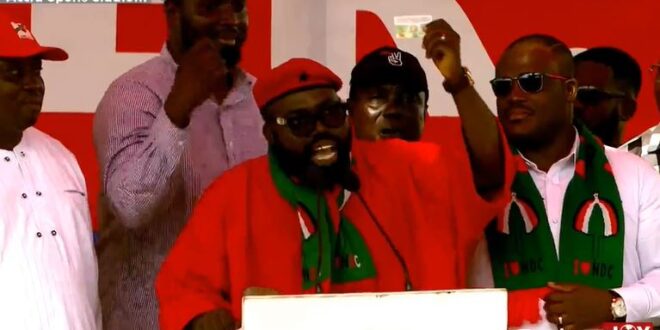 According to the deputy NDC scribe, he bought kenkey with his Ghana card while heading to the New Patriotic Party’s National Delegates Conference held at the Accra Sports Stadium on Saturday.

Delivering a fraternal message at the Conference on behalf of the NDC, he told the NPP faithful that the kenkey is so expensive it cost GHC5.00.

“When we were coming, I decided to buy a ball of kenkey. This ball of kenkey sells for 5 cedis. The leaves on the kenkey alone is 3 cedis more expensive than the kenkey itself, and guess what? Ladies and gentlemen, I bought the kenkey with my Ghana card,” he said amid laughter.

Mr. Otokunor was apparently making reference to the Vice President’s declaration of his choice for the Ghana card over road interchanges in the country’s quest for development.

According to the Chairman of the Economic Management Team, the national identity card, also known as Ghana Card, is more beneficial than the numerous interchanges constructed across the country.

“If you gave me 1,000 interchanges and a Ghana Card, I will choose the Ghana Card because it is more impactful,” he said on Thursday.

The Vice President received severe backlash subsequent to this statement.

According to his critics, the statement means, the Ghana card could be used for everything. Hence Mr. Otokunor’s gesture.

Mr. Otokunor also asserted that the NPP government has been insensitive to the plight of Ghanaians under the prevailing economic challenges.

He posited that the NPP has “only offered poor leadership, incompetent leadership leading to the current economic meltdown and hardships for all Ghanaians.”

According to him, despite the fact that the NPP has only brought suffering to Ghanaians, it remains the luckiest political organization in the country to have received an undeserved level of public support.