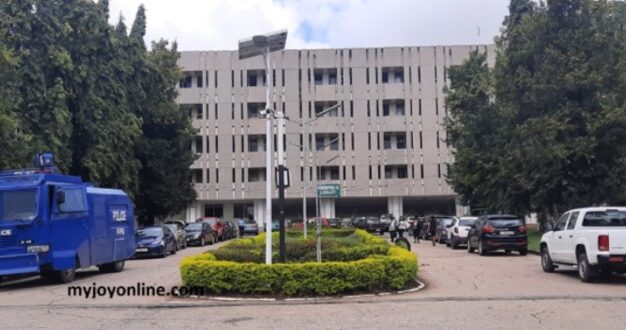 There is heavy security deployment to Kwame Nkrumah University of Science and Technology (KNUST) campus after the Ashanti Regional Security Council served notice of planned disturbances by two rival halls.

Authorities are taking measures to avert a repeat of a similar incident in 2018 that led to the destruction of over ¢3million university properties.

University Relations Officer, Dr Norris Bekoe, told JoyNews more security officers are expected to be deployed to prevent acts that will turn the campus into a battleground.

“We have security people around. We have the National Security, BNI people around. And so anything they plan, they hear. And so once we are aware and we know the extent of the threat, we have to take measures to make sure they don’t occur”.

On Wednesday, the Chairman of the Ashanti Regional REGSEC, Simon Osei-Mensah, issued a statement asking students to remain calm on campus.

Dr Bekoe says the plan by students of Unity Hall and University Hall, also known as Katanga, to cause mayhem after their end of semester examinations is linked to an incident that happened on campus about 2-weeks ago.

“About two weeks ago, there was some clash between some supporters of Unity and Katanga because they said some Unity students went to wear their jacket on the statue in front of Katanga Hall, and they were throwing, flying stones all over the place.

“We had to bring in police to calm the nerves of these students. And because they did not have the opportunity to vent their spleen on each other, they are planning that when they are done with the examination, this is the time to show each other where the power lies, and we cannot allow that to happen”.