Breaking News
Home / NEWS / ‘He was my friend, I could never have suspected him’ – Father of murdered JHS student 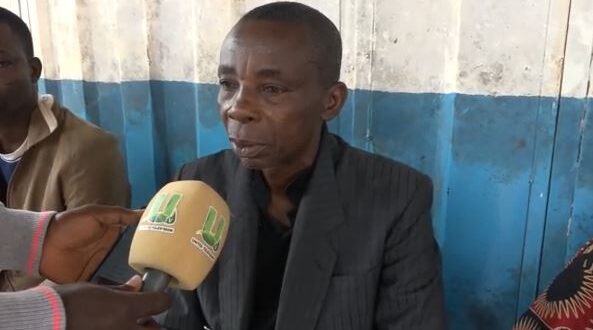 ‘He was my friend, I could never have suspected him’ – Father of murdered JHS student

The father of the 15-year-old boy, Stephen Sarpong, who was allegedly killed and his body butchered and stored in a double door fridge, has described the suspect, Richard Appiah as a friend and business partner.

Speaking to the media, Saturday, August 21, he said he could never have suspected his friend of committing such an atrocious act against him and his family.

The 28-year-old suspect is in police custody in Sunyani after the butchered body parts of the JHS 2 student were found in his double door fridge.

The lifeless body of the suspect’s 12-year-old stepbrother, Louis Agyemang, and a yet-to-be-identified body was also found in his apartment.

The father of Stephen Sarpong, Yeboah Asuama, said, “It was a Sunday when my son told me that he was going to the canteen we operate about 300 metres from our home. But, unfortunately, that was the last time we saw him.

“We had waited for him the entire night to return, but he didn’t. So the next morning, we reported the incident to the Police. We heard nothing concerning the police investigation until this morning when we heard that our neighbour had killed Stephen.

“When we went to look, he [the suspect] had butchered Stephen’s hands, his feet, and head and stored it in his fridge.”

According to him, the suspect, Richard Appiah, was a friend he worked with in the construction business. The suspect was a surveyor.

“The young man, truth be told, is my friend. It was only four days ago that he came to my house that – I also work with him, he’s a surveyor – he came to tell me that the land he was planning on developing had sand and blocks on it and he wanted me to sell it for him, so I did.

“Just yesterday, the young man came to my house to tell me that if he did not get the money by evening time, he would sell it to another person. And I told him I had already sold it and that the buyer would bring the money within the day.

“So that evening, I and a friend of mine took the money from the sales to his house and gave it to him. ¢150 million in total, and he gave us a receipt. And he came to escort us home.”

“Never, never, never – I have heard of no such thing before, and I would have never suspected him. He used to cook and eat with my children. They were also friends,” he added.

Meanwhile, the IGP has directed the CID to provide technical support to the police team in the Bono Region in the investigation.

The IGP and his team are also expected in Sunyani this morning.