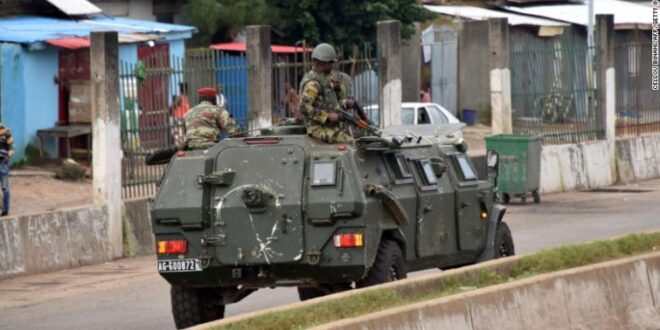 Guinean activist Mohamed Djala Jalloh has said that the citizens of Guinea do not believe in the sub-regional body ECOWAS.

According to him, this is because the 15-member regional political and economic union, watched on, while President Alpha Conde ruled the country in ways that defied the Constitution and their democracy.

Speaking on Top Story, Mr Jalloh said, “the population does not have any belief towards ECOWAS, because of what so far has been going on the ground for over a year now since Alpha Conde got power during this third mandate here. People don’t believe in the ECOWAS and the way they are doing their things.”

His comment comes after ECOWAS scheduled a virtual emergency meeting on Wednesday, September 8, to discuss the happenings in Guinea.

Although the meeting, chaired by President Akufo-Addo (Ghana) ended earlier in the day, ECOWAS did not immediately release a statement on the decision they took to restore Guinea to constitutional rule. Meanwhile, there are rumours ECOWAS is likely to place some sanctions on Guinea, including the closure of neighbouring borders and demand an immediate return to civilian rule.

However, Mr Jalloh believes that the people of Guinea are seeing a lot of efforts being done to right the wrongs of President Alpha Conde.

He revealed that the military, which took over power has plans to release 711 people wrongfully incarcerated without trial, under President Conde.

He stated that already, 80 people have been released from the prisons to their families with many Guineans celebrating the release of some activists who have been in jail for about six months or more.

Mr Jalloh said, “the process is going to go on in the next few days because they need to check out the papers and analyse all the papers before they release some of the prisoners.”

On Sunday, September 5, some soldiers staged an uprising in Guinea’s capital Conakry.

In a short broadcast on state television, Guinean army officer Mamady Doumbouya said that they have dissolved the constitution and the government in the West African state.

This was after earlier reports of heavy gunfire in Conakry, near the presidential palace though it was unclear who was responsible.

After seizing the airwaves, the mutinous soldiers vowed to restore democracy. Colonel Mamady Doumbouya sat draped in a Guinean flag with a half dozen other soldiers in uniform alongside him as he read the statement, saying: “The duty of a soldier is to save the country.

“The personalisation of political life is over. We will no longer entrust politics to one man, we will entrust it to the people,” Doumbouya said, adding that the constitution would also be dissolved and borders closed for one week.

Although the democratic government of Guinea led by President Alpha Conde has been overthrown by the Military, the country is not in chaos.

This is according to two Guineans who spoke under anonymity on JoyNews’ PM Express on Monday, September 6.

They said on Monday, Guinea was characterised by jubilation over the Military take over which many international media networks have described as a coup d’etat.

“The situation is calm. People have been rejoicing throughout the day. People are happy about the coup d’etat even though they are not calling it a coup d’etat. The whole population is rejoicing and jubilating about it.”

The reason for celebration, one said is because citizens viewed the Conde administration as an oppressive kind.

A statement from the sub-regional bloc described the instability as an attempted coup and demanded the “unconditional release” of Condé and his associates.

The statement also demanded, “a return to constitutional rule, failing which sanctions will apply.”