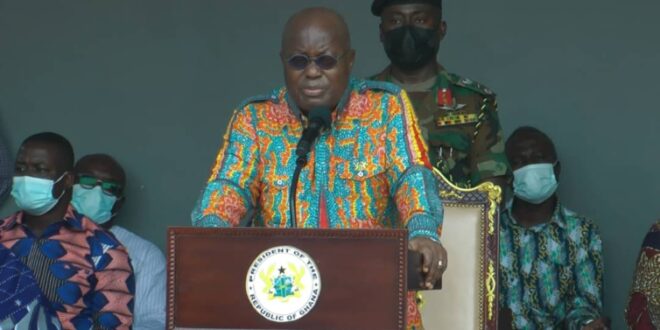 President Akufo-Addo has admitted that although Ghanaians are going through difficult times, he is not to blame.

While admitting that the current economic terrain is a trying one for citizens, he has absolved himself of any responsibility in that regard.

“I admit that Ghanaians are going through difficult times; some people are trying to say that it is my fault, but you know that is not the case. Yet, they will continue to say it,” he explained on Saturday, December 19.

A section of the populace has complained about hikes in prices of some essential commodities, inadequate access to some social amenities and an increasing standard of living which is taking a toll on their lives.

Over the past year, government has blamed the economic challenges on the Covid-19 pandemic, which rocked many countries worldwide.

The opposition National Democratic Congress (NDC) has insisted that this is not the case as the NPP administration is only using that as a distraction from an abysmal management regime.

Isaac Adongo, a leading member of the party has stated that the Covid-19 pandemic helped the Akufo-Addo government more than it affected Ghanaians.

Speaking at a Public Forum by the NDC on December 9, the Bolgatanga Central MP said even though the pandemic imposed difficulties on Ghanaians, it gave the NPP an opportunity to better their efforts in the management of the economy.

According to him, towards the end of 2019, Ghana’s economy was sinking.

“And all the indicators reflect the fact that 2019, Ghana was headed in a very wrong direction, and that it was becoming almost impossible to deal with the propaganda and to deal with the PR because the truth would expose you”, Isaac Adongo stressed.

But President Akufo-Addo disagrees with such views.

He was speaking to residents during the commissioning of an NPP constituency office complex at Juaben in the Ashanti Region.

He was, however, hopeful that “if you all support the vision of this government, we will be able to turn things around.”

According to him, initiatives such as the GhanaCares Obaatampa programme will help ease the situation if Ghanaians rally behind his administration.

President Akufo-Addo said this ahead of the NPP National Delegates Conference, held in the region today.

At the event, he urged delegates to do their best to protect the party’s gains so far and work towards a successful election 2024 campaign devoid of hindrances.